1 out of 5 – Would Recommend: Sgt. Savage & His Screaming Eagles 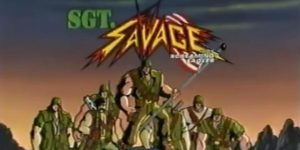 The Screaming Eagles…or the Howling Commandos. Hard to tell.

Welcome back to 1 out of 5 – Would Recommend, where lately I’ve been really into IDW’s Hasbro Heroes Universe. I’ve been fascinated by the way it uses the metaphorical whole buffalo, and as a result we’re watching 1994’s Sgt. Savage & His Screaming Eagles today!

Back in 1944, Sargent Robert Steven Savage was one of the biggest badasses on the battlefield…until his men were betrayed by one of their own. Kidnapped by the I.R.O.N. Army, Savage’s DNA was altered and he was cryogenically frozen for fifty years. Rescued in the present by G.I. Joe, Sgt. Savage whips a crew of unruly soldiers into a high tech fighting force to take the battle to Blitz’s robots!

Hasbro. By 1994, after an impressive 12 years of continuous production, the battle between G. I. Joe and Cobra was growing a little stale. Hasbro’s first attempt at a decade-appropriate revival was the short-lived Sgt. Savage & His Screaming Eagles, which consisted of two waves worth of toys (scaled with the previous Joes, albeit with expanded torsos), one pilot episode released on VHS (available on YouTube, which is how we’re watching it today), and two mini-comics (penciled by comics legend Joe Kubert). Savage would carry over into 1995’s G. I. Joe Extreme, as well as the current IDW series Revolutionaries.

This one-off is raw 90’s cheese and readily forgettable…making it all the more astounding that IDW has made it a pivotal piece of connective tissue in the Hasbro Heroes Universe – albeit after a LOT of cleaning up. 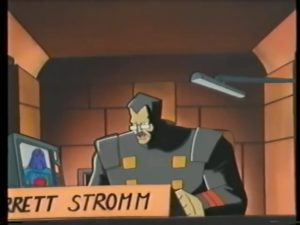 Cherry on top: The special states Blitz created Cobra. As a throwaway line.