Today I’m looking at The Okefenokee Star, Volume 1, Number 6.  It is dated the summer of 1980.  It is published by Swamp Yankee Studios and it is edited by Bill Crouch, Jr.  And if you haven’t figured it out yet, this fanzine is for fans of Walt Kelly‘s Pogo character, comic strips and comic books.  Walt’s widow, Selby Kelly was heavily involved with the fanzine.  In fact, she wrote the opening “The State of the Okefenokee Star” piece on the inside of the front cover!

This short lived fanzine just lasted seven (7) issues that were published from 1977 until the final issue in 1982.  The creator of Pogo and company, was the late, great Walt Kelly.  Unfortunately, Walt passed away in 1973, but through his widow, Selby, Pogo stayed in the public’s eye and awareness for quite a number of years beyond Walt’s death.

Why did I chose issue 6 to feature here, you ask?  Well, my answer would be because that’s the one I pulled out of the fanzine files.  I have a complete set of this terrific fanzine, and it you love Pogo, you really ought to search these out and add them to your collection, or at least one, if you not a completist like me.  They won’t break you bank either, as they generally can be found for very reasonable prices on the secondary market, i.e. your local comic book shop or eBay.

Here is the front cover to Volume 1, Number 6: 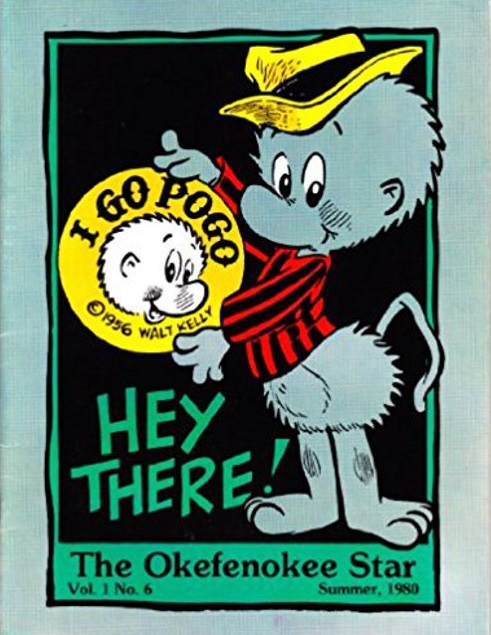 Pogo may not be a household name to today’s fan, but back in the fifties and sixties, just about everyone knew who Pogo was.  He could be found in comic books, in newspaper strips, fanzines, and in quite a number of college papers across our great Country.  In fact, he was practically a movement!  He ran for our Nation’s Presidency on a number of occasions.  In fact, this very fanzine, that I’m holding in my hands, covers his run in 1952, including a picture from the Dallas Morning News, dated October 23, 1952.

Anyway, back to the beginning.  After Selby’s forward/State of Union piece, the fanzine reprints a very rare strip that Kelly did for the New York Herald Tribune, dated August 8, 1952, bringing people’s attention to New York City children in need of getting out of the extreme heat that summer.

This issue then gives us a plethora or reprint strips, nine pages, with four strips each page, of a sequence from May 1949.  These were the very first syndicated daily strips that were ever run.  Kelly’s characters had previously been introduced within the comic book pages of Dell Comics.

Next up is an article discussing the song written and sung by creator Walt Kelly for the 1952 Presidential campaign by the title of Go Go Pogo.  I have the album this comes from, as well as, the single, 45 release.  And so you can get a feel for the song and the singer, here is a YouTube clip of that very song:  https://youtu.be/civxnI7nujA.  Sorry but you’ll have to copy it and paste it into your browser to view and listen to it.

The Okefenokee Star even gives us the score of the music, so that any piano players amoung us can play and sing along!  Here is the illustration that went along with the score: 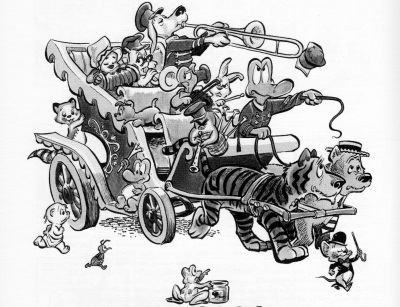 The song score takes up eight (8) pages of the fanzine.  After that is a one page Political Dope Pogo page done by Walt in 1952, as well.  Within Pogo answer burning political questions of 1952!  Then there is that one page article that I mentioned at the top, about Pogo’s run for President in 1952.

Following that is a full page photograph of Kelly stumping for Pogo and three short articles taken from papers covering Pogo’s campaign, including one from Ottawa, Canada!

At the time, a number of newspapers that carried the Pogo strip were unhappy with Walt Kelly’s humor aimed at the election.  They planned to ban his strip or at least drop it from their circulation.  To appease these papers, Kelly wrote and drew replacement strips that he called; “Bunny Strips” because they mostly featured fluffy bunnies and story lines that would not ruffle any of the paper’s sensitive readers!

The Star reprints a number of these strips from the elections held in 1964 and 1968.  Next up is a full page picture of Kelly with the former First Lady, Eleanor Roosevelt and a short article urging people to register and vote.  These were from the election in 1956.

This issue wraps up by reprinting six (6) Sunday strips from 1970.  Unfortunately they are reprinted in black and white, rather than in color, as they were originally printed in newspaper Sunday editions.

But we do get a nice Walt Kelly color illustration on the back cover, also revolving around the elections.  I guess this issue could be considered the political or Presidential issue of the fanzine!  Here’s the back cover: 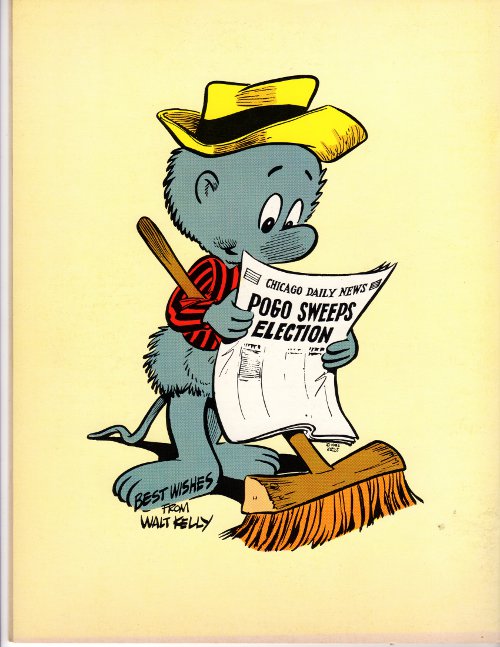 I hope I’ve peaked your interest in Pogo and The Okefenokee Star fanzine.  Thanks for stopping by and I hope to see you again next Friday with a new RETRO REVIEW and again in two weeks for another new Fabulous Find.