1 out of 5 – Would Recommend: The Wizard 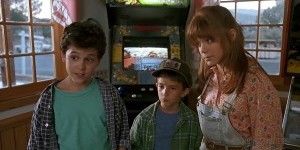 Welcome back to 1 out of 5 – Would Recommend, where we’re examining big budget megacheese this month. To that end, we’re watching 1989’s dubiously family friendly family film, The Wizard. 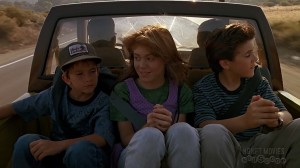 Pictured: Characters that have an easier time crossing the country than adults.

A 13 year old boy  (Fred Savage) sneaks his apparently autistic nine year old brother out of a mental institution and takes him on a cross country hitchhiking adventure to California. Along the way, they link up with a teenage girl/talented grafter and figure out that the nine year old has a near supernatural talent for video games. If they can dodge the adults looking for them long enough, they can win big bucks in a Nintendo tournament!

The film was actually produced by Nintendo, and boy does it show. There’s heavy product placement, most notably for The Power Glove, the Nintendo Power Line, and Super Mario Bros. 3 – which actually made its North American debut in the film. The plot, characters, and story clearly came second to the Nintendo commercial aspect…which is probably what gives the movie so much value as an oddity.

This movie has achieved cult classic status, and for good reason. It’s a feature length Nintendo commercial where the children are responsible and hyper-competent, the adults are useless and immature, and the Power Glove actually works. It’s a big hot ball of ridiculous fun, and is highly recommend. 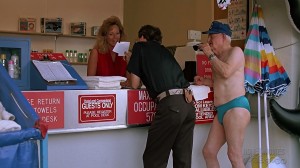 ….Why. Why is the man on the right in the shot.

NEXT WEEK: We watch a film RiffTrax’s Mike Nelson dubbed “The Cheesiest Movie Ever Made” and that had a goof commentary track by Kevin Smith on its Deluxe Edition DVD, 1989’s Road House.