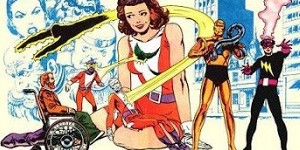 Greetings to all my fellow comic book fans, be it here, at the Back To The Past website, or those that follow me on Facebook or Twitter.  It is time, once again, to take a look at a DC Comics comic book.  Therefore, this week, I’ve pulled out from the DC vault, a comic that goes by the name of; My Greatest Adventure # 80.  It is cover dated June 1963, and features the introduction and origin of the team known as the Doom Patrol.  The cover is by late great Bruno Premiani (both pencils and inks) though it does leave a lot to be desired.  It’s not very colorful and truthfully, it is rather mundane.  It doesn’t even show off the main characters very well either.  Plus the villain of the comic, General Immortus, looks a bit like Doctor Who’s villain, Davrous without the Dalek body.  Oh, an one other thing, Immortus calls Robotman, Automaton on the cover.  I guess I better show you the cover and let you judge for yourself: 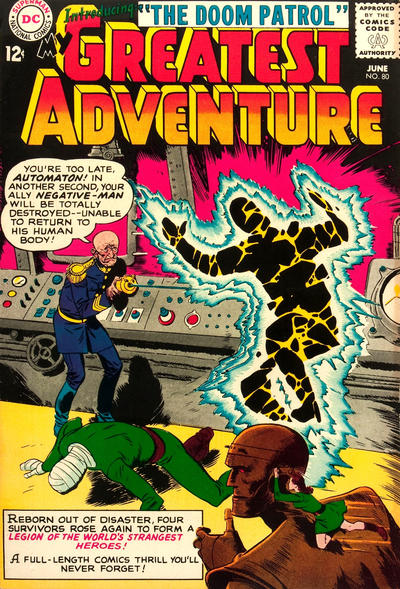 Clearly, the comic was a bit rushed, or at least it seems that way.  Another interesting bit of information is that on the letters page of the previous issue of My Greatest Adventure (#79), the Doom Patrol feature was said to be The Legion of the Strange!  I must admit the Doom Patrol is a bit more catchier than the Legion of the Strange.  Plus, DC Comics already had a Legion, the Legion of Super-Heroes!  Premiani was not your typical super-hero artist, though he also provided the artwork for the very first Teen Titans story in Brave & Bold # 54. Personally, I liked his style of artwork and felt it worked well on the Doom Patrol.

Back to My Greatest Adventure # 80, the story simply entitled; “The Doom Patrol” was written by Arnold Drake and Bob Haney.  The story was a full length thriller, that was broken up into three chapters.  The first chapter basically introduces the individual members of the Doom Patrol and provides their origin stories.  The story opens with Dr. Niles Caulder, a man in a wheelchair, speaking to three shadowy people.  Dr Caulder recounts each of the stories of his three visitors, starting with Rita Farr, an actress who is exposed to underground vapors which gives her the power to grow and shrink at will.  She becomes Elasti-Girl.  Next up is the story of test pilot, Larry Trainor, who survives a plane crash after being exposed to unknown radiation or wave belts at the edge of space, which gives him the power to become Negative Man.  And lastly, Dr Caulder tells of race car driver, Cliff Steele, who’s body is destroyed in a European race track accident, but who’s brain is saved by being transplanted into a metal body.

Dr. Caulder has brought together these three “freeks” to form the Doom Patrol, where he us the “brains behind the group and they provide the power!  They reluctantly agree and their first mission is to deal with a bomb hidden on a nearby pier.  All this action and back story takes place in the twelve (12) page first chapter.

The second chapter only runs four pages, Dr. Caulder sends the Doom Patrol out to investigate an alien space ship and the reader is introduced to the villain of the story, General Immortus, who is spying upon the Doom Patrol.

A pretty good beginning to a pretty cool new group.  One final interesting side fact, is that the Doom Patrol and Marvel Comics‘ The X-Men appeared at virtually the same time and both featured outcast heroes being led by a man confined to a wheel chair, both Dr. Niles Caulder and Marvel’s Professor X.  What were the odds of that ever happening again?  Well, not great but not impossible either, as both DC and Marvel came out with muck-monster heroes at the same time about ten years later, DC had Swamp Thing and Marvel had the Man-Thing!

That wraps things up for this week’s RETRO REVIEW, but please come back next week for a new Fabulous Find.  Be seeing you …