1 out of 5 – Would Recommend: Theodore Rex 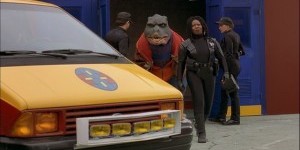 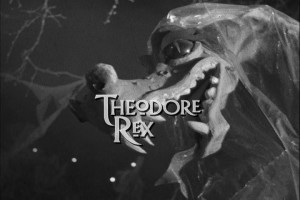 Welcome back to 1 out of 5 – Would Recommend, where sometimes something seems like a great idea and then turns out not to be! In celebration of Jurassic World’s imminent release, we’re talking about 1995’s genetically engineered dinosaur movie, Theodore Rex!

Tough as nails cyborg cop Katie Coltrane (Whoopi Goldberg) is partnered with genetically engineered dinosaur Teddy Rex (voiced by Justice League Unlimited’s George Newbern) to solve two seemingly unconnected murders. Can they do so within 24 hours? Why is there a time limit? The movies doesn’t care, why should you?

A real film studio! New Line Cinema produced this thing, originally for theatrical release. The movie definitely had an appreciable budget, which makes its relegation to direct-to-video all the more puzzling. Until you watch it. 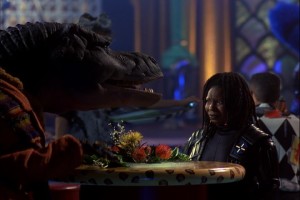 In good conscience, there isn’t one. This is a truly puzzling movie – it is clearly meant to be a family film but portrays a fairly dystopian cyberpunk future (I repeat myself).  The movie spoils the villain’s plan in the first ten seconds, making the hour it takes the heroes to solve the mystery an experience in tedium. It is an entirely aimless and bizarre film, but if you get some funny friends together, it may be salvageable.

NEXT WEEK: Hollywood gets crazy in an oh-so-right way with 2013’s Hansel & Gretel: Witch Hunters. 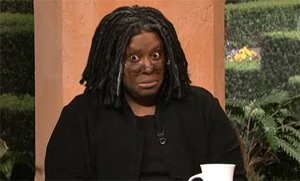 Y’know, if they remade this with Kenan Thompson as Whoopi, I might camp out for it.