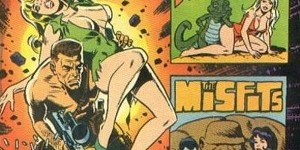 It’s time for a new RETRO REVIEW this week, and from a company other than Marvel or DC Comics.  So digging around I’ve come up from the comic vault with Heroes, Inc. Presents Cannon.  The comic has no number and doesn’t even have indicia to indicate who published it or when.  But it’s from comic creator, Wally Wood and all three of the stories in the comic are signed and dated 1969.  So I suspect the comic itself came out sometime during 1969, or at the very latest during 1970.  It may very well have been self-published by Mister Wood himself.

Let’s take a look at the cover, as drawn by Wally Wood himself, which features all three of the stories in the comic: 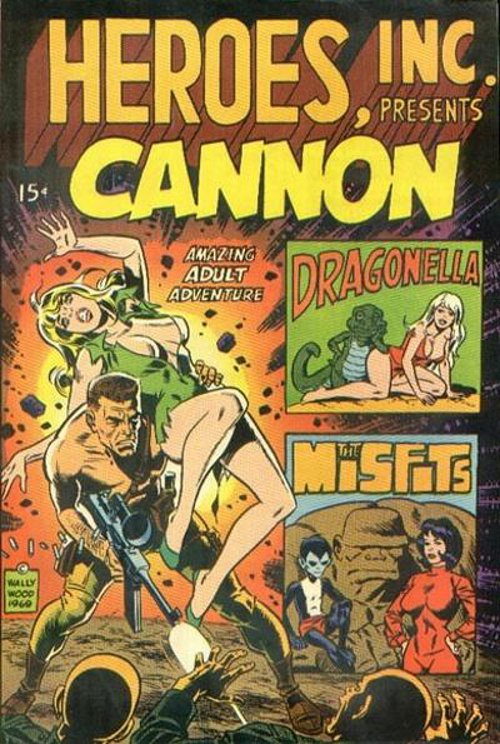 The first story in the comic is simply entitled; Cannon, the hero of the story.  Wally Wood wrote the story and the art was done by Steve Ditko and Wally Wood.  It looks to me that Ditko did the pencils and Wood provided the inking for this strip.  It’s twelve (12) pages and is the longest story in the comic.  The story itself begins with a bang, as armed men break into a top-secret U.S. Government Development Center and kidnap a girl (Jean Voss), killing all the other staff members and quickly fly her via helicopter out of the County.

She apparently worked with a Dr. Isaacs on the U.S. Governments anti-missile defense.  The President of the United States sends in Cannon, a man who has no emotions to rescue Miss Voss.  Cannon appears to be more machine than man!  The Government and Cannon track Voss with the help of a “beeper button” hidden in her dress to the Caribbean.

Cannon in a rocket plane and a squad of paratroopers drop into the enemy’s stronghold.  Cannon crashes into water, hoping that the enemy thinks he is killed, but quickly swims free.  His squad fights valiantly, but are simply meant to be cover for Cannon’s infiltration of the enemy base.  He emerges from below and fights his way  through many soldiers to reach Miss Voss.

In a bit of a twist, the reader discovers Cannon’s mission was to kill Voss before she could reveal the U.S.’s plans.  When he finds Voss, she tells him that she has already reveals the secrets she knows via a dose of truth serum.  Cannon decides it would be of no use to kill her now.  Cannon helps Jean Voss escape using the jet pack he brought along to enable his own escape.

Cannon fights on, eventually commandeering a tank which he uses to good advantage.  Cannon uses the tank to reach the enemy’s airfield.  Just as he reaches a plane he is shot, but manages to take off even though wounded.  He then gains enough altitude to turn back and drop a bomb on the enemy’s base destroying it and all in it, thus protecting the Government’s anti-missile defense plans.

Cannon manages to make it back home in the captured plane and when Jean Voss wants to thank him, he pushes her aside, saying he must make his report, thus reiterating his lack of emotions to the reader.  And that ends the war/spy story.

Here is the splash page from that first story, so that you can get a feel for the Ditko/Wood artwork: 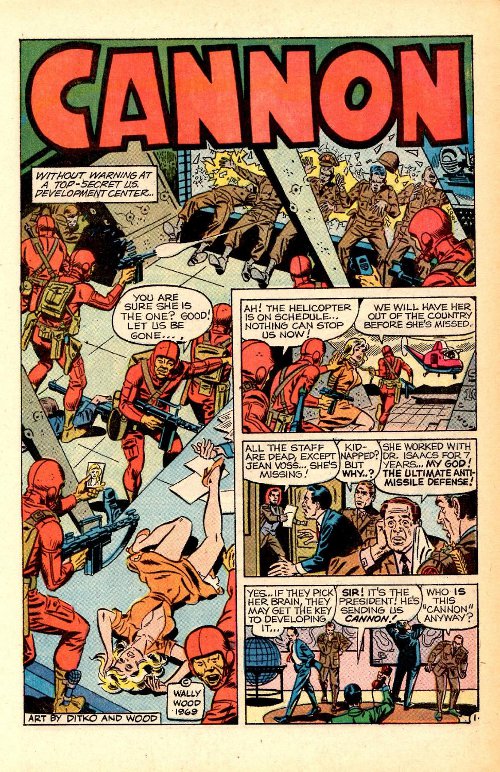 The second story features a group called The Misfits and is in the science fiction vein.  It’s also written by Wally Wood, with art by Wally Wood and Ralph Reese.  This time at appears that Wood provided the pencils and Reese supplied the inks.  The story opens with the discovering of a new planet in our Solar System.  It has appeared suddenly and has settled just beyond Mars.  The U.S. sends up a rocket to explore but the rocket ship is destroyed as it approaches the new planet.

A few days later, a strange “flying saucer” like ship lands neat the U.S. Moon Base.  Hmmmn, didn’t know we had a Moon Base, did you?  A “man” emerges from the ship and he is entirely white, like a “sheet of paper white”!  Somehow the base is then sealed off by this visitor in a dome of opaque luminosity.

Wood then flashes back in time to just before these events.  Where a woman collapses in “New Chicago”.  As she falls she drops a bag full of money.  She has no recollection of stealing the money, but it is determined that the money has disappeared from a local bank.  She can not explain how she got the money and the Government decides to send her to a secret Government project; “Operation Misfit”.

Once there she meets the other misfits; Shag, an alien and Glomb, a mutated human changed to survive the dense gravity of Jupiter.  Together they attempt an escape but fail.  The woman is told that she her name is Mystra, and that she is an artificial human being.  All of the guards fall under some sort of spell and Shag and Glomb also are affected by it.  Mystra is not affected and goes to see what is causing this.  It’s at this moment the reader discovers that Operation Misfit is housed on the U.S. Moon Base that is under attack by the “white” alien.

Mystra and the “white” alien face off against each other in a mind battle and during this battle, Shag and Glomb are freed from their paralysis.  They both hurry to Mystra’s side but have to fight through a battalion of robots set in their way by the “white” alien..  Mystra is overcome, but Shag, with Glomb’s help manage to sneak up and dispose the “white” alien permanently.  The story ends with the three Misfits, an android, an alien, and a mutant contemplating what would happen if they were attacked by a whole plane of “white” aliens.

Take a look at the splash page from this ten (10) page Misfits’ story: 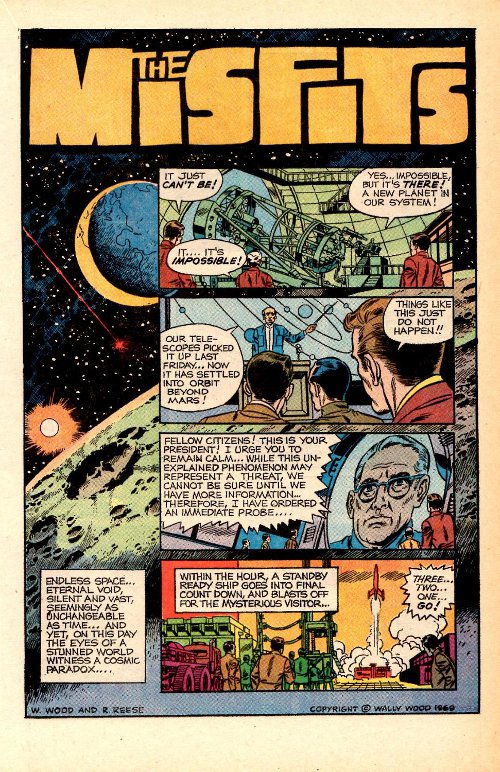 And finally, the third and final story in this comic features; Dragonella.  It’s scripted by Ron Whyte and Wally Wood, with pencils and inks by Wally Wood.  This story is the shortest of the three, running only five (5) pages.  It begins; “Once upon a time …” and is a fantasy story, or at least a fantasy parody.  The story open with the cruel queen giving her daughter to a wizard with instructions to take her to the woods and “lose her”!  He does so, but the baby is discovered by a “kindly” taking dragon.  The dragon takes the baby girl home and asks his mother if he can keep her!  The kindly dragon’s name is St. George and he and his family raise the baby girl to adulthood.

At this time, she leaves the dragon family to find her fortune.  St George decides to accompany her in her quest.  Along the way she encounters a which who tells her she will find a handsome Prince.  Wood then shows us a handsome Prince fleeing from hundreds of women who are out to marry him.  The wizard discovers that the baby did not perish and sends a “middle-aged lust monster” (I just read them people, I don;t write them!). to do away with the Princess.   She kisses the lust monster hoping he’ll transform into a prince, but nothing happens that each of them getting sick.  The Prince arrives at this moment and strikes down the lust monster and claims the Princess as his prize.

Here is the splash page from the Dragonella story: 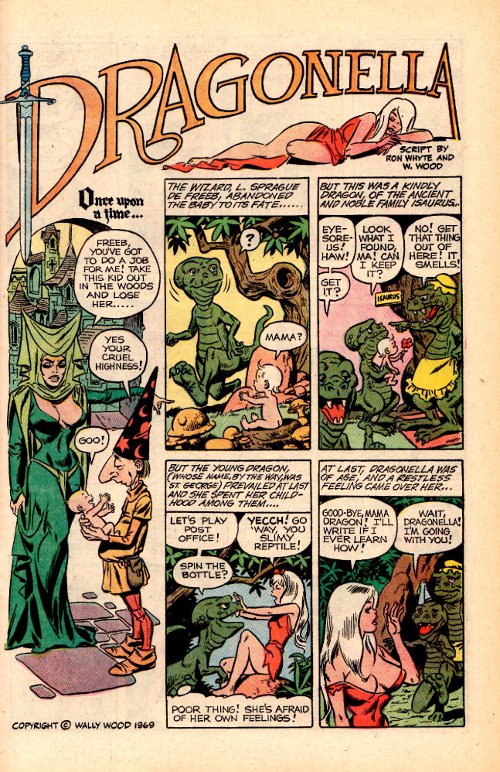 Personally, I like the artwork best from this last story and it reminds me of a number of other Wood creations like The Wizard King.  The comic is a one off, but well worth adding to your collection.  In fact, if you’re interested and near the shop, I believe the shop has one for sale as I write this RETRO REVIEW, but it may be gone by the time my post is published.  Check it out if you’re interested and luck is with you!

Anyway, that’s it for this week’s post, but please come back next week for a new Fabulous Find column.  Until then, enjoy the beginnings of summer and I’ll be seeing you …