1 out of 5 – Would Recommend: Vampirella 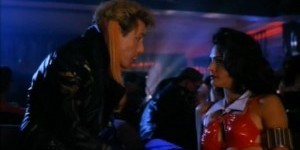 Welcome back to 1 out of 5 – Would Recommend, where no movie is too obscure to be found! Today we’re examining an oft-forgotten comic book adaptation, 1996’s straight-to-video Vampirella feature!

The evil Vlad and his gang of barbarian rebels murder the Elders of Drakulon, their home world, and head off to Earth – a planet they can rule unopposed. The High Elder’s beautiful young step-daughter, Ella, takes off after them seeking vengeance and becomes humanity’s nocturnal protector Vampirellla!

Not every costume translates well onto the screen…

Roger Corman, the undisputed king of the low budget! This is actually the second comic book adaptation Corman produced (of which we are aware, dude’s filmography is prolific), the first being The Fantastic Four – legendarily the cinematic equivalent of an ashcan comic and a future feature for this column.

Vampirellla is pure direct-to-video megacheese and it is eminently enjoyable for it. The acting is either wooden or hammy with no in-betweens, the props and sets make Space Mutiny look good, it’s simply a joy to watch. Check it out! 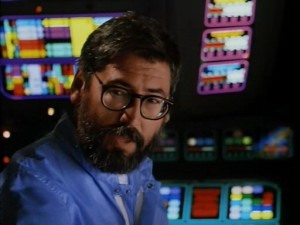 And for some reason, John Landis cameos as an astronaut.