Welcome back for the new Fabulous Find.  As promised, this week I’m looking at the second, and last, The Steranko History of Comics 2 book from Jim Steranko and Supergraphics Publications.  It came out in 1972, following the success of the first book.  You can find my write up of that issue here: http://gobacktothepast.com/fabulous-find-the-steranko-history-of-comics/, if you managed to miss it two weeks ago and care to check it out.  Go ahead, I’ll wait …   …   …   …   …

Okay, back?  If so, then let’s get started on the second book/issue.  Here is the cover that you would have first seen when you opened up your mail order package: 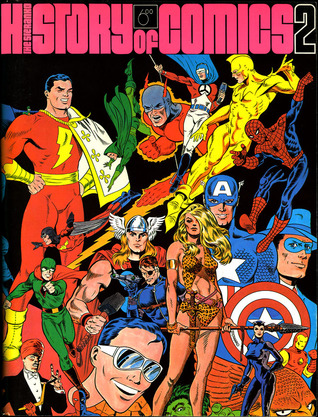 The Steranko History of Comics 2

And like the first issue, the actual cover was a full wrap around cover by the writer and publisher, Jim Steranko.  Here it is for your enjoyment: 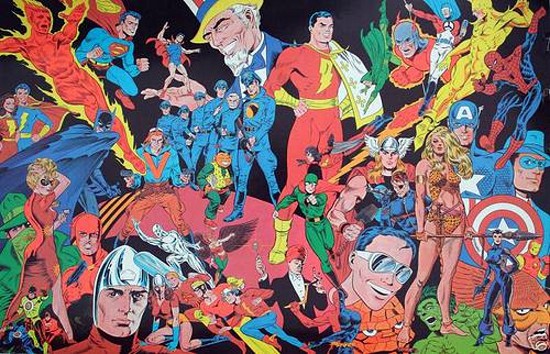 Sorry about the lack of clarity to the wrap around cover.  My scanner was giving me some trouble trying to scan the complete image.

This issue opens again with a preview page written by Steranko this issue.  He states that “Volume two of the History of Comics is a compelling words and pictures portrait of the Golden Age of heroes.”  He goes on saying; “The young reader will find this entourage an eye-opening primer to the world of comics. Those who were around at the time will discover a bonanza of nostalgic bits of business.” And “the student of comic art will be brought right up-to-date on the era of the Golden Age.”  Just a little self hype, but then it’s his book, so who better to hype it?

Steranko even covers The Marvel Family comic book, where all three members appeared together, as well as Hoppy, the Marvel Bunny, who appeared in Funny Animals, as well as, his own comic, too!

Chapter three is entitled; “The Costumed Co-Stars” and Steranko covers heroes like Ibis, Spy Smasher, Captain Midnight, Bulletman and many more.  Frankly there is more heroes in this chapter than you could shake a stick at!

Chapter four is all about the Blackhawks and is entitled; “Hawk-A-A-A!” after the famous cry of the Blackhawks!  Steranko starts at their beginnings within Military Comics, teh into Modern Comics and finally into their own self-titled comic; Blackhawk.

Chapter five is all about the other heroes of the air and this chapter is; “The Flying Heroes” and features; Airboy, the Valkyrie, Tailspin Tommy, Barney Baxter, Skyman and Captain Aero.  Plus many, many others.  He then goes into depth on the comic entitled; Wings Comics.  As with the first volume, Steranko provides reproductions of cover, after cover, after cover.

In Chapter six, Steranko moves out of the skies and addresses; “The Long Arm of the Law”, i.e. Plastic Man!  This pliable hero appeared in his own self-titled comic, as well as, in Police Comics.  For those of you that do not know much about the Golden Age, ol’ Plaz was wonderfully drawn by and artist named Jack Cole.

In the eighth, and final chapter,  Steranko turns all of his attention to Will Eisner‘s creation; The Spirit.  The chapter is entitled; “Sunday Matinee Idol”, as Eisner’s The Spirit was published in a Sunday comic book supplement, which was included in fine newspapers around the country.  Steranko reproduces a nice front pages from these Sunday supplements and also provides and unused Spirit cover done by Eisner.  He even reprints a seven page Spirit story written and drawn by Will Eisner

Again, I think the book was worth my five dollars that I paid for it and think it would still be worth what you would have to pay for it today.  I really don’t think they go for huge sums of money and are still readily available via eBay or Amazon for those that are interested.

One other thing to note, was that Steranko said at the beginning of this volume, that this was the second of a planned six volume series.  Needless to say, as far as I know, there was never Volumes 3 through 6.  But, hey, maybe some day!

Thanks for stopping by and please come back next week for another RETRO REVIEW.  Be seeing you …