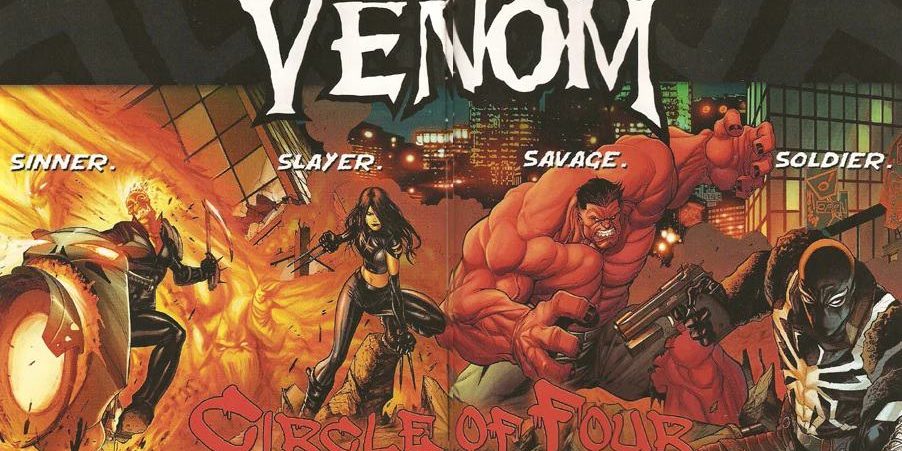 A ton of radical comics from the 90s, including a bunch of Venom titles, come to auction this weekend! That got us thinking about Venom’s best crossovers, which started shortly after his transition from “murderous super-villain” to “murderous anti-hero”. Here are our Top Five!

1996 mini-series Venom: Tooth & Claw is, despite the title, more of a Wolverine story that Venom guest stars it. It sees The Lethal Protector get briefly taken over by body-snatching mutant DIrtnap and used to get a drop on Logan. Venom’s collective nature allows him to quickly get free and he vows to kill his onetime captor. Wolverine’s trying to save a little boy that Dirtnap has possession of, so he reluctantly teams up with the Sinister Symbiote to take down the bad guys. The big bad of the story is Chimera, an interdimensional pirate Wolvie’s tackled before. Their combined efforts defeat the baddies once and for all…at least until writer Larry Hama brought them into the pages Generation X. 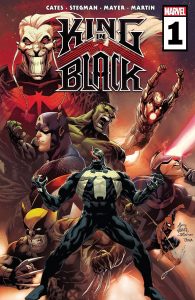 This epic Marvel Comics event places fourth on this list solely because Venom isn’t actually very active in it! Knull, the King in Black and God of Symbiotes, invades Earth as his first step toward universal domination. He encases the planet in a gooey Symbiote shell and unleashes his army of dragons on the planet. Venom rallies The Avengers, Fantastic Four, and Spider-Man to repel the attack, but Knull’s control over all Symbiotes proves Eddie Brock’s weakness. He’s stripped of his costume and tossed off a rooftop, only to return in the grand finale. And his return is EPIC, don’t get us wrong, but it’s not exactly Venom’s show all the way through.

Venom: Funeral Pyre is a 1993 mini-series teaming up what were, at the time, Marvel’s two top anti-heroes. Eddie Brock receives a call for help from fellow investigative journalist Gray Russell. Gray’s father had been a scientist for Hydra, a confession he made on his deathbed. Hoping to expose the plot his old man had worked on, Gray infiltrates the Jadoo street gang that made its home in the old Hydra base. He’s now in too deep, set to participate in a drive-by shooting to become a blooded member of the gang. 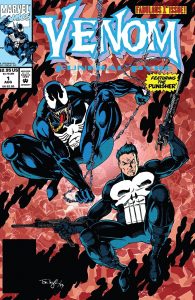 Pick this mini-series up at auction this weekend!

Venom sets out to rescue Gray and runs afoul of The Punisher. Frank Castle is visiting the west coast and heard news reports of the gang’s activity. Focusing his own vigilante crusade on the Jadoo Gang, he’s in no mood to listen to and ex-crook like Venom. His interference prevents Venom from getting to Gray in time, causing the young reporter to develop a hared for both anti-heroes. Using his father’s old lab, he becomes the flame throwing threat known as Pyre and ultimately dies fighting the heroes. A sad ending all around, but a great story that highlights the difference in philosophy between the two lethal vigilantes.

The Circle of Four was a crossover event that ran in the pages of Venom’s 2012 series. It starred the “Agent Venom” version of the character, symbiote powered super soldier Flash Thompson. It takes place right after he goes AWOL from Project Rebirth 2.0, starting with him laying low in Las Vegas. He’s tracked down there by General Thaddeus “Thunderbolt” Ross, then the gamma powered Red Hulk. Unfortunately for them, they’re in town when the demon Blackheart drags the city into Hell.

Wolverine’s genetically engineered daughter X-23 happened to be in town as well, searching for an arms dealer in possession of her genetic code. They are joined by Alejandra Jones, the current Ghost Rider, who had followed Blackheart to Vegas. The four heroes team up to free Las Vegas from Blackheart’s control. This ultimate leads to the Red Hulk hosting both the Venom symbiote and the Spirit of Vengeance, creating quite possibly Marvel’s most extreme single character. The crossover lead directly to Flash losing his fugitive status and joining Captain America’s covert Avengers squad, so all’s well that ended well.

1) Spider-Man and His Amazing Friends

Maximum Carnage is one of Marvel’s most legendary crossover events, famously being adapted into a video game for the Sega Genesis and Super NES. Coming hot on the heels of Venom’s heroic turn in the Lethal Protector mini-series, it featured Spider-Man and his former foe trying to set aside their differences to save lives. Carnage, Venom’s homicidal offspring, is leading a gang of equally deranged supervillains on a slaughter spree across New York City. The truce was short-lived, as the two had differing views of how to resolve the situation: Spider-Man wanted to bring Carnage and his twisted family in, Venom wanted them dead.

In 1988, Venom makes his first appearance and immediately becomes one of Marvel’s most popular supervillains. By 1993, he became one of the most popular anti-heroes. In an era dominated by characters like Ghost Rider, The Punisher, and Wolverine, Venom fit right in. His recent successes on the big screen have revived interest in his 90s era mini-series and other key appearances. If you’ve got those comics and are ready to sell them, Back to the Past is here to help you!