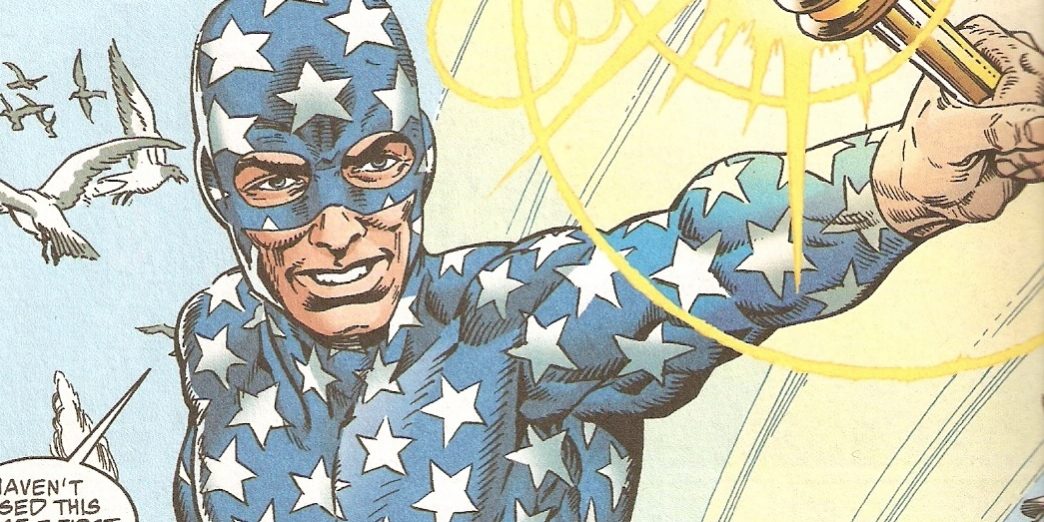 The new season of The CW’s hit show Stargirl debuts tonight! In celebration, we pulled a nifty custom action figure of the original Star-Spangled Kid, AKA Skyman AKA Starman AKA Sylvester Pemberton, from our wonderful Custom Action Figure Collection. Despite being a pretty influential character as this point, poor Sylvester has never had a proper action figure made of him. His successor Stargirl, on the other hand, has had quite a few. How are the two characters related? Find out here! 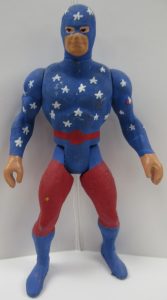 The Star-Spangled Kid first became involved with the Justice Society of America in 1972. Justice League of America #100-102 told the annual JLA/JSA crossover, which involved the two teams rescuing the long lost Seven Soldier of Victory from across time. Sylvester Pemberton was among the heroes rescued and brought to the present day, jumping ahead a couple decades from his native 1940s.The newly returned heroes were promptly forgotten about.

Four years later, All-Star Comics #58 brought the JSA back as a headliner. The only problem is that there was a distinct lack of both young people and women in the team’s ranks. This lead to the creation of new heroines Power Girl, young cousin of SUperman, and The Huntress, daughter of Batman & Catwoman. It also lead to the addition of the Star-Spangled Kid to the team. He occupied an interesting niche, being a contemporary of the old timers who was as young as the new blood.

Back in the 40s, Stars had fought crimes with his fists and a flying car piloted by his sidekick. As a JSA member, he took up the Cosmic Staff of retired teammate Starman. It let him fly, deflect bullets, and fire off energy blasts. He quickly replaced it with the Cosmic Converter Belt, which had the same abilities. He was the first official successor to the Golden Age Starman, but far from the last. 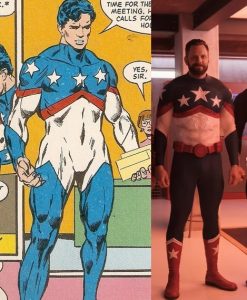 From Skyman to Stargirl

The Star-Spangled Kid helped to found upstart superteam Infinity, Inc. He adopted the “adult” superhero identity of Skyyman, complete with new costume, as their leader. He would be killed off as the series drew to a close in 1988, which is a shame because he would have been perfect for the Justice League of that era. The Cosmic Staff was picked up by a new Starman, son of the original in 1994’s Starman #0. The series would run until 2001, and this Starman would have a hand in forming a new JSA.

Another founder of the new JSA was the second Star-Spangled Kid. Stars & S.T.R.I.P.E. #0 hit shelves in 1999 and caught up with the Kid’s former sidekick, Stripesy. He had remarried and taken on a bratty stepdaughter named Courtney Whitmore. She discovered her stepdad’s super heroic past, stole his old partner’s costume and Cosmic Converter Belt, and made herself the first superhero motivated by petty spite. The new Star-Spangled Kid was born! 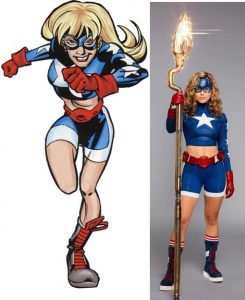 Adventuring with her stepfather and joining the JSA helped mature Courtney. She grew into a responsible and dedicated hero, a highly respected member of the JSA in her own right. When Starman ended its run, the title hero passed the Cosmic Staff onto Courtney as his worthy successor. She adopted the name Stargirl to honor this new legacy.

When DC’s Stargirl TV series debuted in 2020, it simplified the story related above. It had to, as the story wasn’t going to play out over decades and dozens of issues – it had an hour or so. So Sylvester Pemberton grows up to Starman, not Skyman, and never uses any weapon other than the Cosmic Staff. As such, Courtney starts off as the Cosmic Staff-wielding Stargirl rather than the Cosmic Converter Belt clad Star-Spangled Kid. While this tweaked the nose of some fans (that Starman series remains a pretty beloved run, up there with Gaiman’s Sandman), it makes perfect sense for this show.

While Stargirl spends part of the first season erroneously believing herself to be Starman’s daughter, their relationship is really just one of inspiration and legacy. Both in fiction and reality, there is no Courtney Whitmore without Sylvester Pemberton. Which makes it a little weird that she’s well represented in toy form and you need custom action figures to pick him up!

If you’ve got collection like our custom figures, be it more customs, original art, garage kits, convention sketches, whatever – and are looking to sell it, get in touch! or if you want a comment or quote on something we’ve written about, we’re always available! We can be found across the social media stratosphere as @b2pcollect