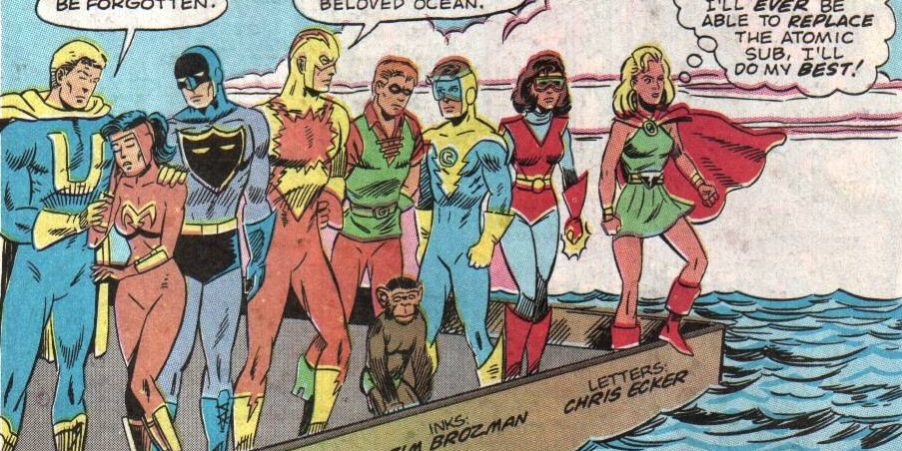 Welcome back to My Hero! Each week, Back to the Past uses this column to tell you why the obscure characters from our custom action figure collection are great! Years ago, we purchased the life’s work of an artist and comic fan whose chosen medium was granting forgotten comic characters the action figure immortality denied to them by major toymakers. We’re still sorting through it all, and we’re making new finds every week! This week’s find, who will soon be available on ebay,launches a month long series focusing on “modern” indie heroes. They are the trio known as The Whiz Kids, one of the top super teams of Big Bang Comics and homage to the Silver Age Teen Titans! 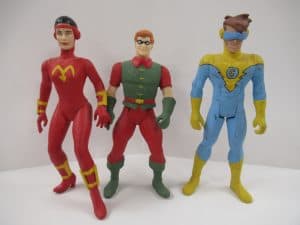 The Whiz Kids as they appear in our Custom Action Figure collection. L to R: Moray, Kid Galahad, and Cyclone.

What Is Big Bang Comics?

Big Bang Comics is a series/company established by Gary Carlson, friend and mentor to Image Comics publisher Erik Larsen, in 1994. Some characters in the Big Bang Universe have their roots going back to fanzines and early indie comics in the 60s to the 80s, including Dr. Weird and Megaton. Others, like The Whiz Kids, were created specifically for the Big Bang Universe.

The slogan of Big Bang Comics is “Remember When Comics Were Fun?” Most Big Bang stories are loving homages to the Golden and Silver Ages, though Bronze and even Modern Age styled tales have become more common in the almost 30 years it has been around. It predominantly draws on the DC Universe for inspiration, but it has some Marvel-styled heroes as well.The first mini-series was published by Caliber Comics in 1994 and 1995. The first two issues were homages to Golden Age stories, the third to the JLA/JSA team-ups of the Silver Age, and the final issue was set in the present.

It moved to Image Comics in 1996, where its first ongoing series began. It ran for thirty-five issues, all of throwback material because that’s what Image wanted. Carlson and crew have bounced around a little bit since then, but seem to have found a home over on IndyPlanet.com with the new ongoing Big Bang Adventures. Appropriately enough, a recent issue began “The Last Whiz Kids Story”. 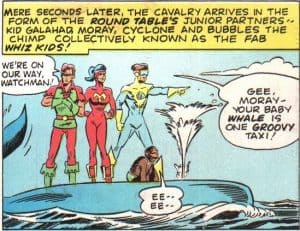 Who Are The Whiz Kids?

Like the SIlver Age Teen Titans, the Whiz Kids are the junior partners of their world’s greatest heroes. Supported by the Round Table of America, the founding Whiz Kids are:

They made their debut in Big Bang Comics #3 from Caliber Comics, later reprinted as issue #6 of the Image series. Entitled the “Criss-Cross Crisis”, it featured the Round Table of America of Earth A and the Knights of Justice of Earth B teaming up to defeat a threat to both their universes. The RTA call in the Whiz Kids for some extra help, and the kids acquit themselves well. Even so, the combined might of the three teams isn’t quite enough to save the day – The Atomic Sub ultimately sacrifices his artificially-extended life to do that.

The Whiz Kids leap into action!

The Whiz Kids appear more sporadically than their mentors do, but did net themselves a self-titled one-shot in 2003. That issue introduced their “Bronze Age” version, The Whizzards. Lead by Cyclone, the team is an homage to the New Teen Titans. That was their last major appearance until Big Bang Adventures #14 last month.

Like all Big Bang Comics heroes, they were never lucky enough to get mass-produced action figures. That said, our customizer was a big fan! Figures depicting the “Golden Age” Knight Watchman  and “Modern Age” Ultiman have already found their way to eager collectors through our eBay store. Now they are joined by The Whiz Kids, and we know that the Atomic Sub is in there somewhere too. And if you’ve got collection like our custom figures, be it more customs, original art, garage kits, convention sketches, whatever – and are looking to sell it, get in touch!