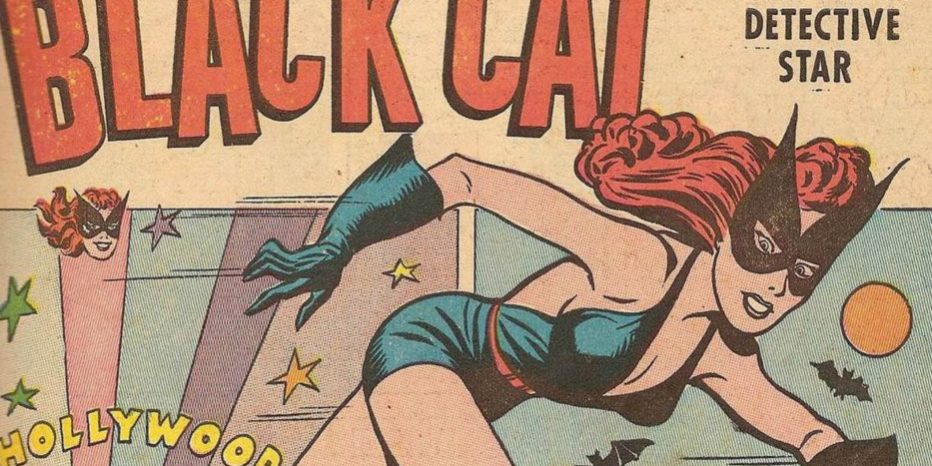 Welcome back to My Hero, wherein we here at Back to the Past tell you why the obscure characters from our custom action figure collection are great! Years ago, we purchased the life’s work of an artist and comic fan whose chosen medium was granting forgotten comic characters the action figure immortality denied to them by major toymakers. We’re still sorting through it all, and we’re making new finds every week! This week’s find, who will soon be available on ebay, is Harvey Comics’ legendary superheroine The Black Cat!

One Of Harvey Comics’ Top Characters 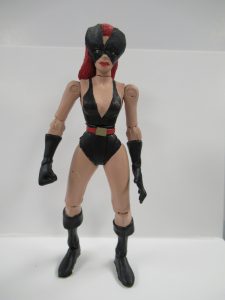 Harvey Comics’ Black Cat as she appears in our custom action figure collection!

Debuting in Pocket Comics #1 with a cover date of August 1941, The Black Cat is secretly Hollywood starlet Linda Turner. Linda started her Hollywood career as a stunt woman before becoming a leading lady and finds the life of a superstar unbearably boring. When Garboil, a director she was working with, turned out to be a Nazi spy, Linda saw the chance to alleviate her boredom and do some good in the bargain. Donning a skimpy costume, she put her stunt skills to work busting up the spy ring as The Black Cat! She was quickly joined in her adventures by daring reporter Rick Horne, who dated Linda but was infatuated with the fantasy of the Black Cat.

In 1942, Black Cat teamed up with fellow Harvey Comics heroes War Nurse, Shock Gibson, and Captain Freedom to fend off an invasion of Los Angeles. In 1946, somewhat late in the superhero craze, the character was still popular enough that she warranted a solo title. It weathered the changes in the industry fairly well, morphing into a western-focused title (still starring The Black Cat) before converting into a horror anthology with 1951’s issue #31. 1955 saw Linda briefly retake the title with her western-style adventures from #54-56. The title returned to horror with #57, and ended with issue #62 in 1958. 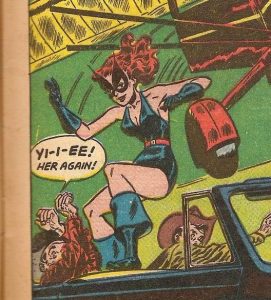 An action shot from one of Black Cat’s Golden Age adventures. Her costume’s neckline fluctuated over the years.

From The Silver Age to the Public Domain

With the resurgence of the superhero genre in the early 60s, Black Cat Comics returned for three quarterly issues. Linda was not part of Harvey Comics’ second attempt at returning to super-heroic tales in 1965, and that’s basically been it for the character. She has since lapsed into the public domain, meaning reprints aren’t hard to find but she is surprisingly going largely unused in new stories. Her most recent “new material” was a Golden Age story being reprinted in the pages of Mystery Science Theater 3000 The Comic, with Jonah and the bots being written into the story (in place of Rick Horne) and riffing on it.

Which is a shame! Relatively few characters, superhero or otherwise, received their own solo title in the Golden Age, Even fewer of those characters were women, especially in the boy-driven superhero field. Her title ran almost as long as All-Flash or Green Lantern did back in the 40s, and that deserves some respect.