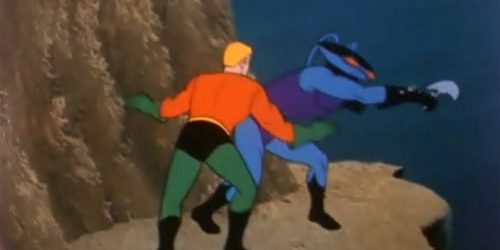 Welcome back to Consigned, Cool. & Collected, where we take a moment to appreciate the stories that make the stuff we handle every day so dang cool. This week, we’re looking at a Very Good copy of Aquaman #35, the first appearance of Black Manta, from a recent auction session. 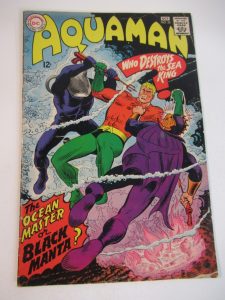 Black Manta is easily Aquaman’s most iconic foe, filling the role of The King of Atlantis’ opposite number in the Legion of Doom on Challenge of the Super Friends, serving as a major antagonist in Aquaman’s one video game, and practically co-starring in his first feature film. Black Manta’s first comic appearance is a silly Silver Age tale that featured him sending his gang of mutant Manta-Men to capture the King of the Seven Seas before he menaces Atlantis. Long story short, Aquaman’s evil half-brother Ocean Master intercedes to rescue Aquaman because no one else can be allowed to defeat him. It’s made clear that here that Manta & Aquaman have clashed in the past, in unseen adventures. Aquaman #35 hit newsstands in June of 1967.

On September 9, 1967, CBS debuted the Superman/Aquaman Hour of Adventure as part of its Saturday Morning Cartoon lineup. Anchored by cartoons starring Superman and Aquaman, it featured various animated adventures of DC heroes including The Atom, The Teen Titans, Hawkman, The Flash, and even the Justice League of America! The very first Aquaman cartoon that aired featured him doing battle with Black Manta and his mutant Manta-Men, a mere three months after their first comic appearance. We know that 60s animation was cheap, but that would require a near-South Park level turn around time to achieve. Unless, of course, there was some behind-the-scenes collaboration going on. 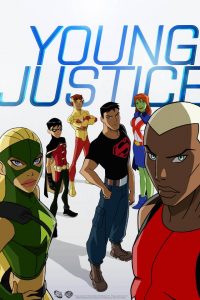 The poster that revealed Aqualad to the world.

The two stories were both written by comics legend Bob Haney, thanks to Filmation partnering with DC Comics to make the show. The vastly different production schedules for the two media meant that the comic story was released first but the cartoon story had to have been written first. Even so, artist Nick Cardy was apparently involved in the design work for the cartoon – the credited comic creators are still the creators of the character.

This would not be the last time that something like this occurred, but it is the last time that creators remained the same in both media. The next most notable example of this phenomenon came in the form of GCPD officer Renee Montoya. She was a creation of Batman: The Animated Series but made her first appearance anywhere in the pages of Batman #475 nine months before her on screen appearance. The most recent character to get this treatment was, appropriately enough, Black Manta’s son Jackson Hyde AKA Kaldur’ahm AKA Aqualad II. He is the creation of Greg Weisman, Brandon Vietti, and Phil Bourassa for their cartoon series Young Justice. Audiences got their first look at him in promotional materials for the series about a year before it aired. He made his comic book debut in the pages Brightest Day #4, some four months before Young Justice’s first episode aired.

When there is genuine synergy between comic books and the movies/TV shows based on them, cool things like this can happen. And knowing those cool stories can help you get the best value for your collection. After all, a good salesman truly knows their product and your pals are at Back to the Past are great salesmen. If you’ve got a collection you’d like to get the best value for, give us a shout. If you just want to hear more cool stories about cool stuff, keep coming back to Consigned, Cool, and Collected every Monday!