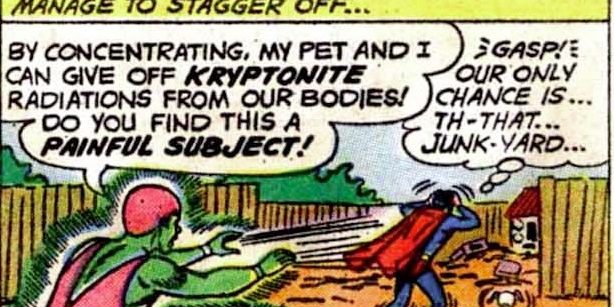 Welcome back to My Hero, wherein we here at Back to the Past identify and delve into the obscure characters our custom action figure collection. Years ago, we purchased the life’s work of an artist and comic fan whose chosen medium was granting forgotten comic characters the action figure immortality denied to them by major toymakers. We continue our celebration of Superman and our countdown to the release of Superman & Lois on HBO Max by looking at one of Clark Kent’s childhood nemeses: The Kryptonite Kid!

A Best Case Scenario for Being Irradiated 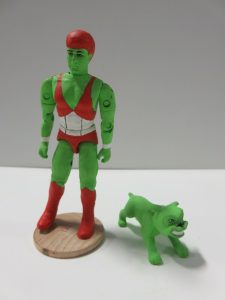 The Kryptonite Kid as he appears in the My Hero Collection.

The distant planet Blor seems to have precocious little mercy for juvenile offenders, sentencing the youth who would become the Kryptonite Kid to 20 years in prison for undisclosed crimes. Instead of serving his time, he opted to volunteer to pilot an artificial satellite in an experiment with a 1 in 10,000 chance of survival. Together with a lab dog, he was shot into space in the general direction of Earth and watched Superboy & Krypto’s adventures through the satellite’s monitoring equipment. Being a juvenile delinquent, the goody-two-shoes Boy of Steel disgusted the young Blorian.

As they approached Earth, the Kid and his dog passed through a cloud of gaseous Kryptonite that completely enveloped them. Turning them green and highly radioactive, they now had the ability to kill Superboy and Krypto just by standing nearby. They put that power to good use upon landing on Earth as the Kryponite Kid and Kryptonite Dog. Clark Kent is only saved when Mr. Mxyzptlk, irked by the idea of someone taking the easy way out in destroying his nemesis, teleports the Kryptonite Kid and his dog away. Superboy #83 set the tone for future appearances of the Kryptonite Kid with deus ex machina being the only way the Boy of Steel can triumph. 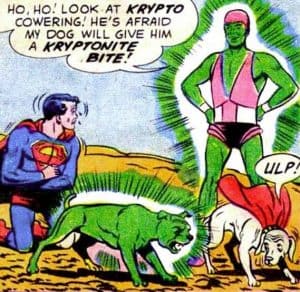 The Kryptonite Kid and Dog from the pages of Superboy #83.

He returned as the Kryptonite Man in Superman #299, being used alongside villains like Brainiac and Parasite in attempt to kill Superman so that Earth could be demolished for the creation of a hyperspace bypass intergalactic teleportation route. His only other adult appearance was in Action Comics #583, the finale of Alan Moore’s epic “Whatever Happened to the Man of Tomorrow?” coda for the Pre-Crisis Superman. In keeping with K-Man’s dangerous but also-ran status, his throat is ripped out by Krypto the Super-Dog (who dies in the effort) before he can fully penetrate the Fortress of Solitude when it is besieged by super-foes.

While the original Kryptonite Kid/Man only made a handful of appearances (although they were favorites for reprint issues), his influence is still felt today. Various Kryptonite Men have appeared over the years. The first Post-Crisis Kryptonite Man, an altered clone of Superman, debuted in 1990. The first completely human Kryptonite Man (in the comics, at least) debuted in 2006, and another showed up Post-Flashpoint in 2011. The concept of a baddy who is permanently radiating death toward Superman is just too good to pass up, and it all goes back to the Kryptonite Kid.

But the original alien delinquent remains a bit of an also-ran and not even the fanboy pleasers that ran DC Direct in the 90s gave him a figure. As such, you need to turn to the My Hero collection if you’re going to find the K-Kid and his dog to menace your Boy of Steel. And if you’ve got collection like it – be it original art, custom action figures, convention sketches, whatever – we want to hear about it!