The Value of Cover Stock (or “Fractions of Large Numbers”) 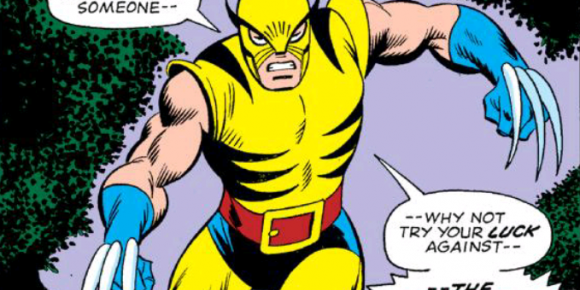 Welcome back to Hammer Drops, where the experts at Back to the Past illustrate their decades of collectibles knowledge using examples from our auctions. This week, we’re looking to our April Twenty-Fourth and our May Fifteenth sessions – both featured fairly well-preserved copies of Incredible Hulk #181, but the latter auction’s specimen was coverless. How did that change the value? Keep reading to find out! 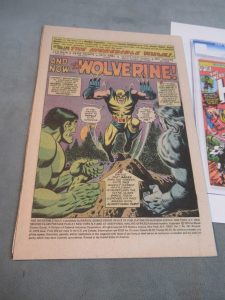 A coverless copy of Incredible Hulk #181, 1st appearance of Wolverine, sold for $650 at auction.

Incredible Hulk #181 was the second part of a two-issue arc that saw the Jade Giant rampaging through the wilds of Canada. It was his second meeting with the cannibalistic transforming beat The Wendigo, who is like The Hulk but with a craving for human flesh taking the place of boundless rage. The story also served to debut a character cooked up by editor Roy Thomas, writer Len Wein, and artist John Romita, Sr. He’s a short Canadian secret agent with sharp claws and a bad temper, named for the woodland predator of the same description: The Wolverine.

Wolvie made a dramatic final page debut in #180, but #181 is generally considered his first “full” appearance. He battles both monsters, briefly helping Ol’ Jade Jaws with the more bloodthirsty beast before doing his duty for Queen & Country against the Hulk. He doesn’t win, but he does get his licks in. Wein brought the character along with him when he got the job of rebooting the X-Men a few years later, and the rest is history.

The Teachable Moment: A Fraction Of A Large Number Can Still Be Pretty Big 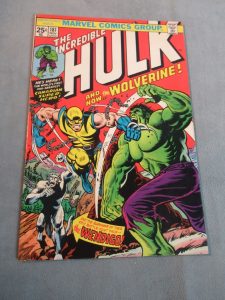 If you weren’t aware, Back to the Past uses “Filler Copy” a catchall grade for anything under “Good” (roughly a two on a ten-point scale). We use that term because the book will fill in a hole in your collection but isn’t otherwise worth writing home about. Typically speaking, something without its cover falls under that grade, as it is incomplete. The coverless specimen of Incredible Hulk #181 originated as an unsold copy whose cover was ripped off by the original retailer so they could get a refund on it. This leaves it in much better shape than most Filler books but it is still damaged and incomplete. It sold for only 12% of the $5,500 realized price that the “Very Fine” specimen had gone for in April.

Which, if you do the math, is still $650! While not what the comic can be worth, it’s nothing to sneeze at either. That is the takeaway here: if something is valuable enough, it can be worth good money even if the condition is poor. Our owner, Scott Lovejoy, has seen this with more than a few Golden Age comics over the years. Something that the uninitiated would assume was destined for the dumpster will sell for solid money thanks to the sheer rarity of finding one in any condition. That’s why it can pay to let experts like Back to the Past look at your collectibles before deciding how to dispose of them. We know what we’re looking for and what we’re looking at better than most! Get in touch if you’re looking to sell that collection gathering dust in your attic or keep following Hammer Drops every week for tips and tricks if you’re determined to do it yourself!