Who is the Original DC Comics Parasite? 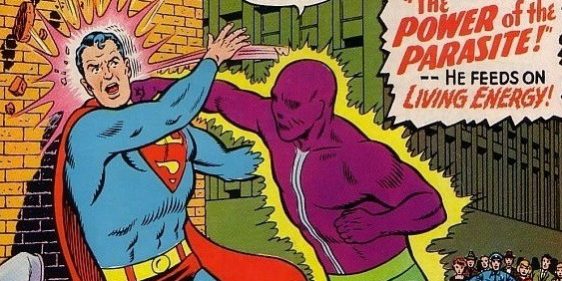 Welcome back to My Hero, wherein we here at Back to the Past identify and delve into the obscure characters from our custom action figure collection! Years ago, we purchased the life’s work of an artist and comic fan whose chosen medium was granting forgotten comic characters the action figure immortality denied to them by major toymakers. To celebrate Superman & Lois landing in full on HBO Max today, we’re looking at the first of Superman’s energy-sucking foes to call himself The Parasite! 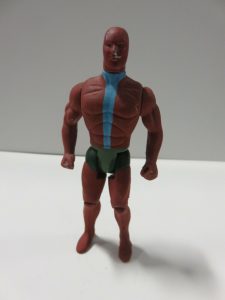 Maxwell Jensen felt as though his employers didn’t value his work as janitor. That’s why, in the pages of Action Comics #340, to steal the company’s payroll for himself. However, Maxwell showed why he wasn’t exactly Employee of the Month when he decided that only reason security could be so tight around the company’s toxic waste barrels was that it was the hiding place for the payroll and promptly cracked one open with crowbar. Being a comic book universe, Charles Darwin’s natural selection failed to take over and instead Jensen gained superhuman abilities from the face full of radioactive meteorite that he got from his harebrained plan.

Specifically, he was mutated into a purple-skinned monster with the need to absorb energy directly from living things! This brought him into conflict with Superman, whose powers served as a veritable buffet fear for Jensen. His absorption of Superman’s energy also let him in on Superman’s secret identity, with which he attempted to blackmail the Man of Steel into leaving Parasite’s crime spree alone. The pair ultimately came to blows in the streets of Metropolis, and Parasite’s powers rendered the crowd gathered to watch unconscious and his blackmail threats moot. The Last Son of Krypton’s never ending well of energy proved too much for Jensen and he overloaded, discorporating into atoms. 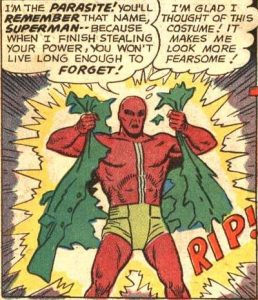 Parasite from his first appearance.

But you can’t keep a good comic villain down, and Jensen would return to bedevil Superman on several occasions between 1966 and 1986. He teamed up with Doctor Doom in the pages of Marvel Treasury Edition #28, second team-up of Spider-Man and Superman, and posed as Superman’s twin brother Kor-El to briefly conquer the world in World’s Finest #246-247. He was erased from existence by the Crisis on Infinite Earths.

Where Is The Parasite Now?

Intermittently remembered. Firestorm #58, which came Post Crisis, saw general DCU big bad Darkseid conspire to recreate The Parasite using STAR Labs janitor Rudy Jones. The Post-Crisis Parasite has gone on to become the best known, racking up appearances on Superman: The Animated Series, Smallville, Supergirl, Justice League Action, and the animated feature Superman: Man of Tomorrow. Jensen has appeared now and again, featuring in the continuity-minded cartoon Young Justice and as the second Parasite on Supergirl, but Jones is far an away the go-to version of this Superman foe. While Jensen’s appearance in the gorgeous Alex Ross mini-series Justice got an action figure, his Silver Age look is strictly the province of custom figure makers like the creator of the My Hero Collection. And if you’ve got collection like it – be it original art, custom action figures, convention sketches, whatever – and are looking to sell it, we would love to help you!