DrawerBoxes: The Best Way To Store Your Comics

If you’ve been collecting comics for any length of time and have more than a few hundred comics in your collection, chances are you have seen the old-fashioned “long boxes.” They’ve been the standard storage container box for comics for over 20 years. There are a couple of different brands, but all long boxes load from the top and have lids.

A number of years ago, because of the weight involved in lifting long boxes, some manufacturers came out with a smaller version, typically known as a short box. Like its bigger brother, it has a lid and is filled from the top.

But both styles suffer from the same disadvantage, namely that if you stack the boxes on top of each other you need to constantly keep lifting boxes to get into the ones at the bottom of the pile. Worse, if you stack them more than three or four high, you run the risk of the boxes crushing, possibly damaging the valuable comics inside.

There has to be a better way.

And now there is!

A Smarter Way to Store Your Comics

DrawerBoxes™ are storage boxes designed for comics that fill from the end rather than the top. They are actually a two-part container, consisting of an outside shell that provides support and a drawer that slides out of the shell from the end. This eliminates the need to repeatedly move boxes to get the contents of the box at the bottom of the stack since all of the boxes can be opened just like a filing cabinet.

The shells are made of extra durable cardboard, reinforced in such a way that they will support much more weight than the old-fashioned long boxes. Yet, because each box is separate and has handles on each end, they are just as portable.

DrawerBoxes can be stacked in any configuration you want and every comic in each drawer is still accessible. You can even remove the drawer in the box at the bottom of the stack and leave the rest of the boxes in place while you peruse your collection.

This unique design means that you can gain more storage space per square foot than was previously possible by stacking the boxes higher. It also means you won’t have to lift another box again to find a comic.

DrawerBoxes are 9″ wide and 26″ deep. Since they are shorter than a long box they will also fit lengthwise in many closets. They are 13 3/16″ tall, so even dividers with tabs will fit in them.

They’re made of heavy-duty white corrugated cardboard and there is a pull opening on the front of each drawer to facilitate opening the drawer. Because each box uses considerably more cardboard than a long box, one unit weighs almost 5 pounds.

Each DrawerBox holds approximately 235 bagged and boarded comics, depending, of course, on the number of pages in the comic. They will hold both Modern Age and Silver Age comics with boards. They will also hold Mill Cases™. Oh, and did we mention that each box comes with four dividers?

Will They Really Do All You Say?

You bet they will!

The boxes are strong enough to be stacked six boxes high when completely filled with comics. In fact, we have used them for years and have found no evidence of sagging. These are the strongest boxes made for comics by anyone. Should you be using anything less for your collection?

We do encourage you to use good judgment when building your arrangement. Anything can tip over when stacked tall enough. We suggest either stacking them against a wall for stability or arranging them with at least one less in the number of rows going across as they are stacked high. That is, if you stack them four high we suggest stacking them at least three across. By the way, a stack of twelve boxes will hold over 2,800 comics in just over five square feet of floor space, with every comic at your fingertips. Let’s see you do that with a long box.

Don’t forget about Box-Locks as well — use Box-Locks to anchor the top row of Comics DrawerBoxes together, giving the entire structure stability and allowing you to pull out a drawer on the top row without the box tipping forward.

You can order DrawerBoxes online directly from the manufacturer here! 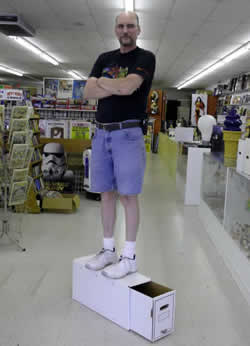 At Back to the Past, we’ve tinkered with many different comics supply companies and product lines, and there are definitely cheaper alternatives to DrawerBoxes. However, to be frank, they suck wind.

Cheap knockoffs don’t have the strength and resilience to be stacked as high as Comic DrawerBoxes.  Imitations sag with only a box or two on top.  The outer shell is ill fitting and not as tightly manufactured as Comic DrawerBoxes.  Even the little touches that make Comic Drawerboxes unique are missing — no dividers, no anchor-holes, no interlocking tab on the back of the shell, etc.

On the topic of strength, check out our pal Mike Boyle, a statuesque 205 pounds of real man.  He loves to demonstrate how hardy a true-blue Comic DrawerBox is by hopping up on top of one and having customers pull the drawer out.  This no-BS test will consistently flatten other unworthy imitators, whose names we will not mention…

Back to the Past has given the real deal our exclusive stamp of approval and we do not carry other cheaper versions.  We think you’ll agree that Comic DrawerBoxes are hands-down the one and only product you should be using to stack your boxes!

How to Build a Drawerbox »