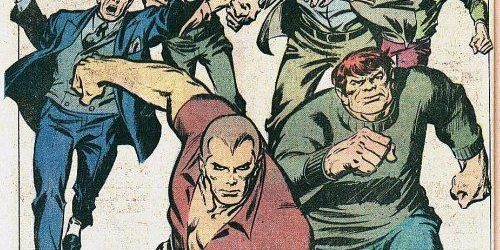 Welcome back to My Hero, wherein we here at Back to the Past tell you why the obscure characters from our custom action figure collection are great! Years ago, we purchased the life’s work of an artist and comic fan whose chosen medium was granting forgotten comic characters the action figure immortality denied to them by major toymakers. We’re still sorting through it all, and we’re making new finds every week! This week’s find, who will soon be available on ebay, is Doc Savage. No less a personage than Stan Lee himself cited Doc Savage as the forerunner to the modern superhero.

The Man of Bronze 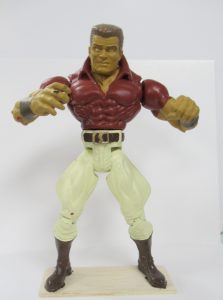 Doc Savage as he appears in our Custom Action Figure Collection.

Clark Savage, Jr. never got a chance to be normal. When he was born, his father assembled a team to scientists to raise his son to be the absolute peak of human potential. In both body and mind, the young Savage was trained to the absolute limit of human ability: a master of the sciences, a doctor of medicine, able to outdo just about any Olympian, etc, etc. He also ended up with a gorgeous tan, earning him the appellation the Man of Bronze. A brilliant inventor, he kept his most dangerous inventions in a secret arctic fortress known as The Fortress of Solitude.

As an adult, he moved to New York City and set up shop as an independent crime fighter. Assisted by the Fabulous Five, five eccentric experts in various fields and men of action, he battled crime in 181 novels published as pulp magazines. His series ran from 1933 to 1949, an era which coincided with his earliest comic book adventures. Debuting the pages of Shadow Comics, starring his fellow pulp hero The Shadow, his early comic stories closely matched his novel adventures. He briefly got his own series, which devolved quickly into standard superhero fare, before returning to the pages of Shadow Comics as a regular feature. That arrangement continued until the series ended in 1949 – a bad year for Doc Savage, all told.

Reborn at the House of Ideas 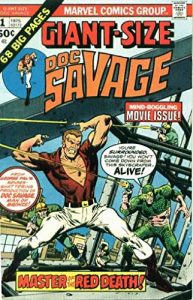 The cover of the Giant-Size reprint of Doc Savage’s first Marvel story. As you can see, Marvel took “Man of Bronze” literally.

1972 saw Doc Savage return to comic pages with a new, full color series from Marvel Comics. Running for eight issues, it adapted four classic pulp novels in two issue chunks. It was on a bi-monthly schedule, meaning it ran until January 1975. That year saw Doc get a minor boost from an ill-fated feature film outing. The movie was a poorly received box office dud, but Marvel Comics did its best to give Doc the red carpet treatment. Their magazine imprint published eight issues of black-and-white comic stories geared to adult readers, Doc appeared in team-ups with Spider-Man and The Thing, and a giant size issue reprinted the first two issues of the series from three years earlier. The cover of that first issue was redrawn, and Doc Savage’s new design serves as the inspiration for our customizer’s figure.

Unfortunately, Doc Savage remains fairly obscure in the world of superheroes. Dwayne “The Rock” Johnson was working on flick where he would star as Dr. Clark Savage for a little while, even hashtagging the announcement with “World’s First Superhero” (which isn’t entirely accurate….), but the project has since fallen through. Doc Savage comics seems doomed to mainstream obscurity at the moment. That means that if you want an action figure of him, you need to turn to something like our custom action figure collection. Speaking of which, if you’ve got collection like it – be it original art, custom action figures, convention sketches, whatever – and are looking to sell it, get in touch!