The Spider-Man That Inspired Power Rangers

Welcome back to Consigned, Cool, & Collected, where we’re breaking from our usual format a bit this week. Oh, we’re still highlighting a nifty collectible item you can buy on eBay, but not one of ours. See, t-shirt seller Cleveland Sleeves was our booth neighbor at Motor City Comic Con a few weeks backs and the owner was such a good neighbor (and had such cool stuff) that I wanted to give her a shout-out in these pages. I bought a nifty Japanese Spiderman t-shirt from her, so we’re talking about the the Japanese version of Spidey and his pop cultural significance around the world – and how he’s intersected with stuff we’ve sold. 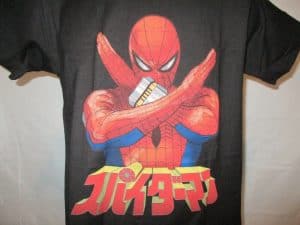 The Toku Spidey t-shirt sold by Cleveland Sleeves, as seen on their eBay page.

In the late 1970s, Japanese film and television  studio Toei licensed the rights to Marvel’s Spider-Man for live-action TV. This was around the time that the short-lived Amazing Spider-Man live action series aired in the U.S., so there was some precedent at play. And reportedly, the original plan was to create a faithful adaptation with only some changes made to appeal to Japanese audiences and reflect Japanese society. As development wore on, those changes piled up and…well, lets just describe the premise. 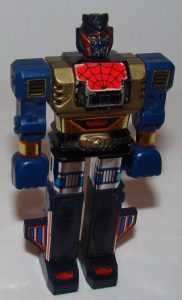 The Shogun Warriors version of Leopardon, released as Leopoldon. Stock image used, though we would LOVE to handle one in this kind of condition.

Young motorcycle racer Takuya Yamashiro witnesses the crashing of a UFO and brings his father, a space archaeologist, to investigate. Unfortunately, the ship was downed by Professor Monster and his Iron Cross Army, who don’t take kindly to human interlopers. They murder Takuya’s father and injure him. Taking refuge in the UFO, Takuya meets the warrior Garia from the Planet Spider. Garia injects the boy with some of his Spideran blood, healing him and granting him spider-powers. He also gives him the Spider Bracelet, an arm gauntlet that holds the Spider Protector (read: Spider-Man costume), shoots webbing, and lets him command the UFO. Properly named Marveller, it can transform into the giant robot named Leopardon. Which is good, since Professor Monster grows his monsters to giant size when they’re defeated at normal size. Takuya become Spiderman, Emissary of Hell and protector of Japan against the Iron Cross Army.

As you can see, some pretty big liberties were taken with the source material. That said, even bigger liberties were taken with Tokusatsu subgenres. You see, before Spider-Man, there had been superhero shows like Kamen Rider where a costumed hero battled man-sized monsters and there had been Super Robot shows like Johnny Sokko & His Flying Robot where giant robots fought giant monsters. Japan’s version of Spidey was the first to combine the two genres into one show.

Seeing Spider-Man’s success, Toei teamed up with Marvel once again to apply the formula to their low-rated Sentai franchise. The result was Battle Fever J, a team of superheroes vaguely inspired by Captain America who piloted their own giant robot when the going got tough. Thus, Sentai became Super Sentai and received new life, running continuously to this day. Stan Lee, then the head of Marvel’s film and TV division, liked his company’s work on Super Sentai and tried to bring it to American shores. He did not succeed, but one of his staff on that project went on to be head of programming at Fox Kids. When Haim Saban brought her the idea she’d worked on ten years prior, she green lit the show. That gave the world Mighty Morphin’ Power Rangers, which is also running to this day. 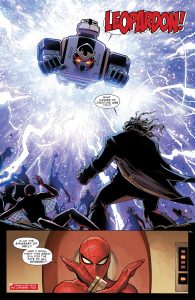 Marvel streamed the show, complete with English subtitles, on their website back in 2009. That was its first (and only, so far) release in America. However, Leopardon crossed the ocean almost immediately. In 1979, just a year after the Japanese series debuted, Mattel released Leopardon as part of their Shogun Warriors line. He was one of the 3″ scale die-cast figures and released relatively late in the line’s run, meaning he ironically wasn’t included the Marvel Comics series based on the toys.

Takuya and Leopardon would make their most significant American appearances in 2015’s Spider-Verse crossover event. Both would appear as part of a multiversal army of Spider-Men, with Spider-Man 2099 upgrading Leopardon using his future technology. They returned in 2018’s Spider-Geddon event, having not been among the spider heroes that made regular appearances in the interim. Japanese Spidey and his giant robot have been teased for the still-untitled sequel to Spider-Man: Into The Spider-Verse, set for release in about one year.

What might look like an oddly weebish Spider-Man shirt might just be a tribute to a pop cultural milestone on two continents. An otherwise uninteresting die-cast robot might just be a Spider-Man fan’s holy grail. And that random modern crossover issue might just be the comics debut of a cult-favorite TV oddity. That’s why it pays, often literally, to let your friends at Back to the Past handle the sale of a collection for you rather than going it alone or donating it. We’ve handled the Leopardon Shogun Warrior toy before, we’ve handled his key comic issues before, there’s dang few things we haven’t handled over the years, so let that experience work for you.