Why Liquid Blue Can Be Solid Gold 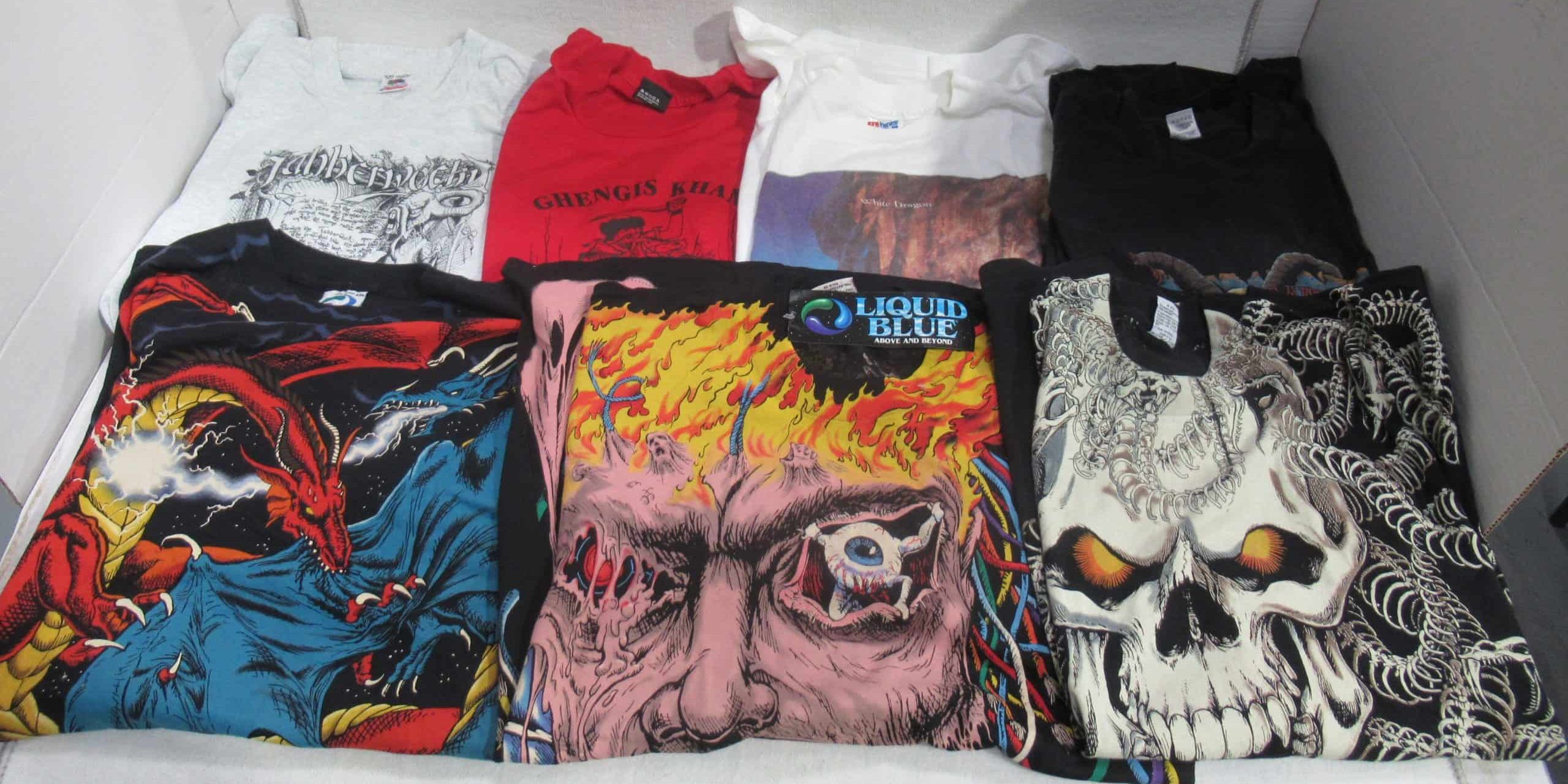 Welcome back to Hammer Drops, where we talk about the lessons that you can learn from the realized prices at our auctions. In keeping with the t-shirt theme from Monday’s blog post, we’re looking back to Lot #294 from our August 14 session. Casual observers were taken aback when a box of t-shirts sold for $1,400.Those in the know saw that it was just three out of the seven t-shirts that warranted that price – and we’re here to talk about why.

Who is Liquid Blue? 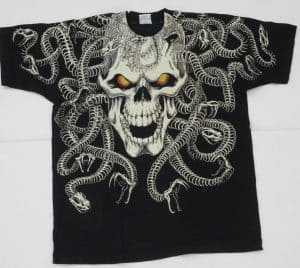 The Liquid Blue Medusa Skull t-shirt that sold as part of this lot.

Liquid Blue is a t-shirt maker that’s about the same age as I am, according to their website. They were founded to sell licensed tie-dye t-shirts based on the Grateful Dead. In the decades since, they’ve expanded to make pop cultural t-shirts of all kinds, although rock ‘n roll is still a big part of their DNA.

These shirts are from earlier in their expansion. They’re from a product line called “Dark Fantasy”, around 1994. In keeping with their Grateful Dead roots, they’re fantasy designs that would look sweet airbushed on the side of a van. They are:

That last one is a psychedelic take on Wolverine’s origins. Prior to this auction that one shirt alone had sold for as much as $485. After the auction, a specimen sold on eBay for $1,200. The Medusa shirt can sell for $200 or more, as can the dragons. That, of course, is for true vintage specimens – reissues have been made. A quick and easy way to tell the difference is that the originals had those scratchy cloth tags at the neckline that basically all t-shirts did for a long time. Modern ones have tag information printed on the shirt in that spot, for the wearer’s added comfort. 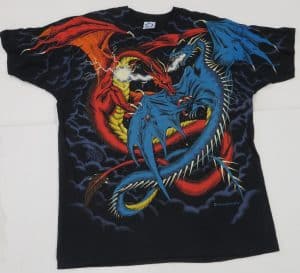 The Liquid Blue Dueling Dragons T-Shirt that sold with this lot.

Why Pay That Much For A T-Shirt?

We’re well aware that Macklemore would be spinning in his grave (if he were dead…) at the idea of spending $1200 on a t-shirt. It happened in this case for two major reasons. The first is specific to the brand. Today, Liquid Blue is a well established brand with a cult following. They have a reputation for great quality and even better art. That means that, within the world of people interested in such fashions, their old stuff in good shape is going to be sought after. Heck, they brought these old designs back by popular demand! Of course the originals are worth good money.

The second is specific to the design. Simply put, Wolverine’s 90s popularity hasn’t ever died down. The Weapon X Overload design hits a very specific niche, being psychedelic horror art based on X-Men comics. That means the folks in that niche are gonna be wild for it. The realized price reflects that. 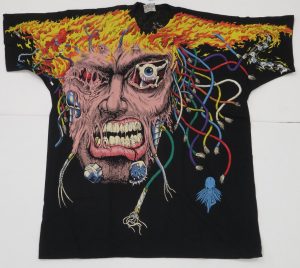 The Liquid Blue Weapon X Overload T-Shirt that sold with this lot.

Back to the Past’s team leader Scott Lovejoy reminds me that we’d be remiss not to acknowledge other factors involved in realizing this price. A niche t-shirt maker wasn’t exactly moving millions of shirts back in the day, for one. That means there are fewer specimens around to begin with, much less high quality specimens. Speaking of which, these shirts appear to have been hardly-if-ever worn or washed. Cloth collectibles, almost more than another, are destroyed by regular use and cleaning. Had the original owner worn these shirts until they became holey and threadbare, the realized price would be different story. But the continued popularity of the brand and the character depicted are the main factors in propelling them to these heights.

You could be forgiven for not immediately seeing over a thousand dollars of value in some old t-shirts. Especially shirts with weird concept designs like these. But we do see that value. That’s why it ain’t a bad idea to let Back to the Past help you with your collection – our trained eyes will catch what yours might not. But if you insist on going it alone, you can keep coming back for free tips every Wednesday in Hammer Drops.