Who Is The Other Captain Future? 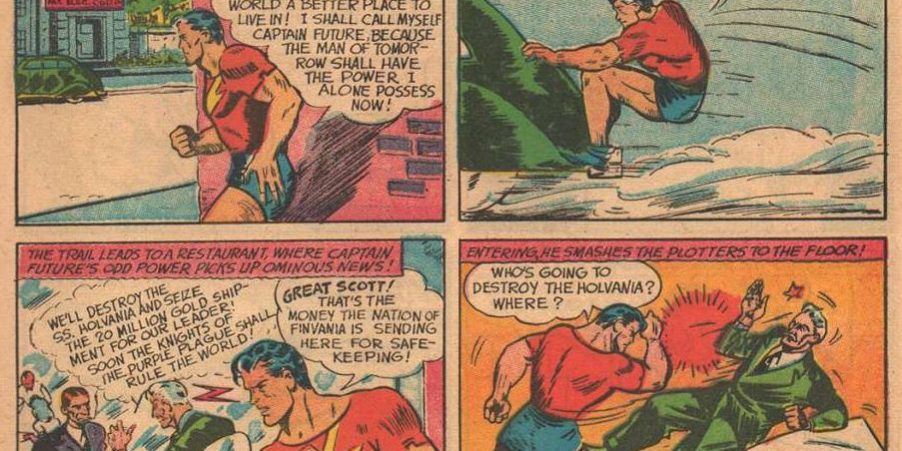 Welcome back to My Hero, wherein we here at Back to the Past identify and delve into the obscure characters from our custom action figure collection. Years ago, we purchased the life’s work of an artist and comic fan whose chosen medium was granting forgotten comic characters the action figure immortality denied to them by major toymakers. This week’s selection is one of two characters named Captain Future published by the Pines publishing empire – the comic book one! 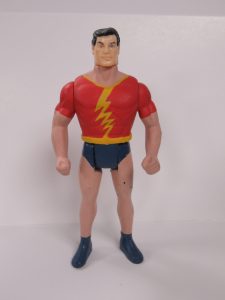 Nedor Comics’ Captain Future as he appears in our custom action figure collection.

The original Captain Future is a pulp hero from the distant future of 1990 that debuted in the winter 1940 installment of Startling Stories. He was co-created by future comics great Mort Weisinger and principally written by Edmond Hamilton. That character was adapted into an anime in 1978, and maintains a certain cult popularity on both sides of the pacific. That’s not the character we’re talking about.

Nedor Comics’ Captain Future debuted only months after the pulp version. Startling Comics #1introduced Andrew Bryant, a modern day scientist who discovered that a mixture of gamma and infrared rays did a human body good. His irradiated form grants him super strength, flight, and the ability to hurl bolts of lightning from his hands. Dubbing himself “Captain Future”, because he’s the man of tomorrow, he joined up with his detective girlfriend Grace Adams to fight crime. Surprisingly, super strength did not mean super durability – his primary weakness was blows to the head! 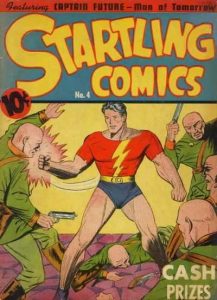 Captain Future on the cover of Startling Comics #4.

This Captain Future was fairly successful, with his feature appearing in forty out of Startling Comics fifty-three issues. The Nedor Comics heroes have fallen into the public domain since the Golden Age. As such, this Captain Future has become quite popular with smaller publishers. He’s popped up in AC Comics, Dynamite Entertainment, and even Wildstorm titles in the last thirty to forty years.

No Toys For Captain Future

Customizers like the lovable loon behind the My Hero Collection! Come back next week for another selection from the collection, Nedor Comics’ Black Terror. And if you’ve got collection like this– be it original art, custom action figures, convention sketches, whatever – and are looking to sell it, we would love to help you!