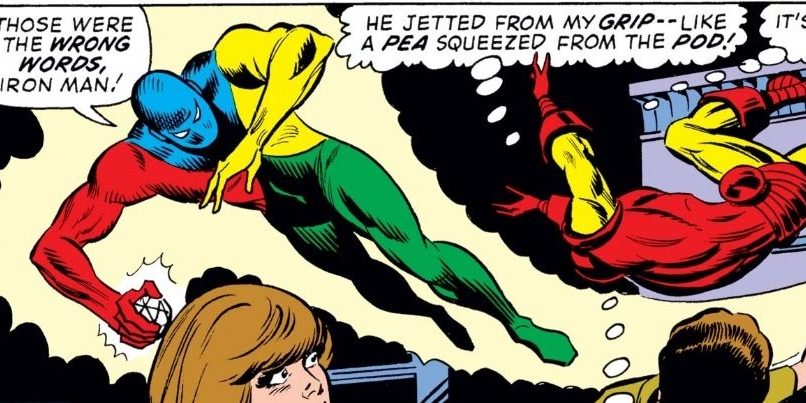 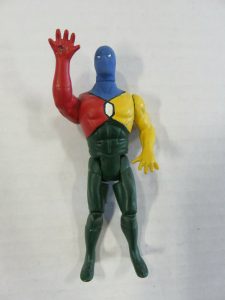 Doctor Spectrum custom figure from the My Hero Collection

Welcome back to My Hero, our weekly dip into the world of customized action figures! A lone superfan spent years repainting, rescultping, sewing capes, and generally altering dozens of action figures to capture the likenesses of the most obscure characters in all of comicdom. We were so taken with his life’s work that we bought the entire collection, and it is now our honor to present it to you. We’re continuing to celebrate Marvel’s recent Heroes Reborn event by looking at figures based on the original Squadron Sinister – this week, we’re talking Doctor Spectrum! How to sell action figures.

Like all four of the Squadron Sinister members introduced in Avengers #69-70, Doctor Spectrum wasn’t given an origin story beyond being a human being altered into a super-villain by The Grandmaster. Thanks to his full-body costume, Spectrum’s ethnicity wasn’t even clear in those first appearances, which ended with him being defeated by Iron Man. 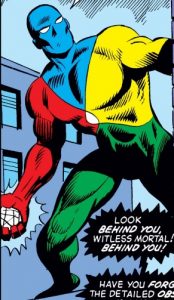 Dr. Kinji Obatu from the pages of Iron Man.

That defeat set up his return in the pages of Iron Man #63-67. Tormenting Shellhead with a mix of direct attacks and holographic constructs, Doctor Spectrum makes Tony Stark’s life difficult using his Power Prism for the better part of three issues before his origins are revealed. The Power Prism was a Skrull warlord who lead a failed coup against his race’s emperor, for which he was imprisoned in conscious crystalline form and exiled to space. His rocket was diverted to Earth by The Grandmaster, where his prismatic form was found by corrupt African finance minister Kinji Obatu. Obatu reveled in humiliating foreign dignitaries and businessmen who needed his nation’s oil reserves and was willing to use murder to keep his position secure. He and the crystal Skrull were a match made in heaven, and the symbiosis between the two allowed Doctor Spectrum to perform his light-manipulating feats.

Well, it was a match made in heaven until Iron Man defeated them. The Power Prism decided that Obatu was no longer a suitable host and the current plan turned out to be less about “revenge” against the Armored Avenger and more about possessing him. Stark, with some help from Thor, is ultimately able to shake the Prism’s influence and Obatu remains abandoned by his alien power source. Marvel Two-in-One #41 featured The Thing and Brother Voodoo doing battle with Dr. Obatu in his capacity as a corrupt official in Africa, but his lack of superpowers lead to him falling to his death during the struggle.

You’ll notice that Nebulon, who factored prominently into the previous two Squadron Sinister write-ups, is absent here and that’s because Obatu didn’t appear in that story. After his battle with Iron Man, the Power Prism was found by corrupt televangelist Billy Roberts (subtle) and he was the Doctor Spectrum with the Squadron Sinister throughout the rest of their 70s appearances. The Power Prism has changed hands a couple more times since then, notably possessing The Wasp in an Avengers Annual, but it seems that the crystal Skrull’s malign influence may finally be gone (at least until Al Ewing hears about him and adds him to the Kree/Skrull Alliance). Like his teammates, Doctor Spectrum has been eclipsed by his Squadron Supreme counterpart (sometimes distinguishable by his cape) in notability and what few toys exist are of him. As usual, if you want the original evil version, you need to turn to the My Hero Collection!