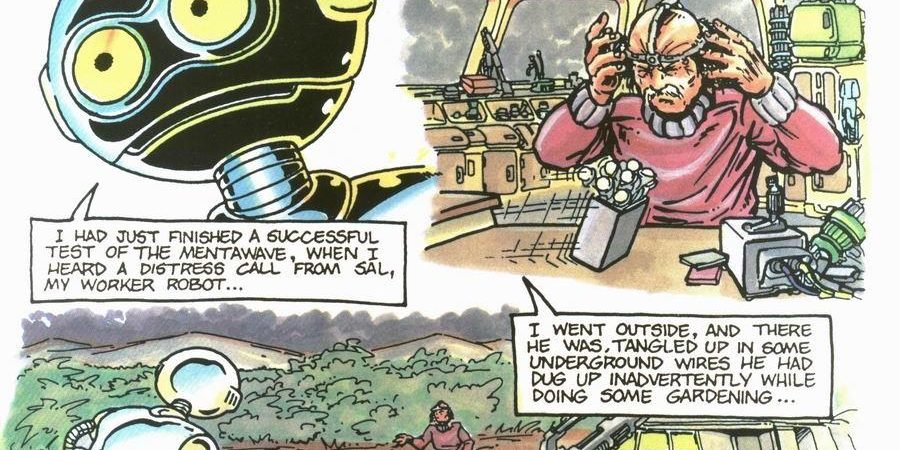 Welcome back to Consigned, Cool, & Collected, where we dive into the deeper background of the collectible goodies we carry here at Back to the Past. Today, the Fugitoid collector figure we’ve got up on eBay – sketched on and signed by Teenage Mutant Ninja Turtles co-creator Peter Laird – has lead us to reflect on TMNT’s decades-long status as a truly independent success story. 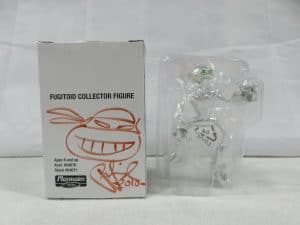 The signed/sketeched Fugitoid Collector’s Figure currently for sale on eBay!

In the fall of 1983, friends Kevin Eastman (age 22) and Peter Laird (age 30) of Northampton, Massachusetts used their tax refunds and a loan from Eastman’s uncle to live out their dreams: they were going to publish comic books. Their first effort was the individually copied zine entitled Gobbledygook #1 with print run of 150 painstakingly hand-stapled issues. It was an anthology of short tales featuring an ad for their first professionally printed effort. The newly minted Mirage Studios began selling Teenage Mutant Ninja Turtles # 1 on May 5, 1984 at the Portsmouth, New Hampshire comic convention.

Though intended as a one-shot, the Turtles proved such a runaway success (with the first print run selling out and quickly rising in secondary market value) that a second issue followed in October and a third in March 1985. The second year of TMNT would also bring its first brushes with licensing, receiving a role-playing game in the form of Teenage Mutant Ninja Turtles and Other Strangeness from Palladium Books and lead miniatures from Dark Horse Miniatures (no relation to the comic publisher).

It was around this time that Mirage Studios hooked up with Surge Licensing, a hungry young firm that saw tremendous potential in the ridiculous world these two had created. They connected Mirage Studios up with Playmates Toys and Fred Wolf Films to bring the Turtles to the masses in the form of toys and cartoons. The Teenage Mutant Ninja Turtles TV cartoon, produced by Fred Wolf Films, debuted on December 28, 1987 and was followed in summer 1988 by an action figure line from Playmates Toys. Two years later, Golden Harvest Films and director Steve Barron would bring the TMNT to the silver screen (complete with toy tie-in from Playmates) for the first time in what ended up one of the most successful independent productions of all time. Both cartoon and toyline would run until 1997 when they were replaced by Ninja Turtles; The Next Mutation, a live action series from Saban Entertainment with an accompanying toyline from Playmates.

The Status is Quo 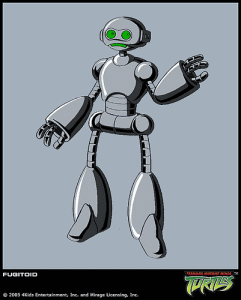 The Fugitoid as he appeared in the 00s Ninja Turtles show, the last major production overseen by Mirage Studios.

And so it went, with the Mirage Group’s lucrative licensing empire being run by Peter Laird out of Massachusetts. Kevin Eastman sold his stake in the Turtles in the year 2000, and Laird used his new complete control to get both a new animated series (2003’s darker and edgier Teenage Mutant Ninja Turtles, which ran until 2009) and movie (2007’s TMNT) off the ground, both with an accompanying toyline from (you guessed it) Playmates Toys. In 2009, Peter Laird commissioned Playmates to make a limited run of figures based on The Fugitoid, perennial alien ally to the turtles, and sold them directly to fans himself. This included the option for personalized touches, like the signed and sketched specimen we find ourselves with. Which he could do, because he was the ultimate owner of the character.

Later in 2009, that would no longer be true. Laird sold the Teenage Mutant Ninja Turtles franchise in its entirety to ViacomCBS, one of the largest media companies in the entire world. For over twenty years, The Mirage Group had overseen a licensing empire of toys, comic books, TV shows, major motion pictures, and consumer goods from New England, partnering with media titans without being absorbed. Their way of independently bringing the first TMNT to movie theaters provided the blueprint for Marvel doing the same with Iron Man in 2008. Their partnership with Playmates Toys put that company on the map, empowering them to create their fan-favorite Star Trek and The Simpsons action figure lines of the 90s & 00s. In the end, Laird seemed to just be dog tired of doing a job traditionally done by a massive committees at huge corporations and we can’t blame him.

What might look at first glance like just another toy from a popular franchise may in fact be the symbol of an era’s end, signed by the guy who both started it and ended it. Situations like this are why it never hurts to let experts like your friends at Back to the Past look at your collection before you donate it for the tax write-off!