Welcome to another, though slightly different, edition of Fabulous Find. Rather than an old collectible, I’d like to bring to your attention something brand spanking new. Though it definitely has ties to something that happened over fifty (50) years ago. And what is that, you might ask? Well, it’s a new soft cover book written by J. Ballmann, and it is entitled; The 1964 New York Comicon: The True Story Behind The World’s First Comic Convention.

I’m not sure where I first heard about this book, but once I did, I knew I would have to buy a copy.  And once I located it, I quickly sent in my hard earned cash for a copy.  You too, can own a copy, if you’re interested I would suggest Amazon.com, or even via eBay.  Though be careful not to pay more than the listed $29.95, as at least one dealer on eBay, is trying to get premium prices for a book that can still be bought at retail.

Here is the front cover, scanned from my copy, so you know what you’re looking for:

And while I’m at it, here’s the scanned image of the back cover, as well: 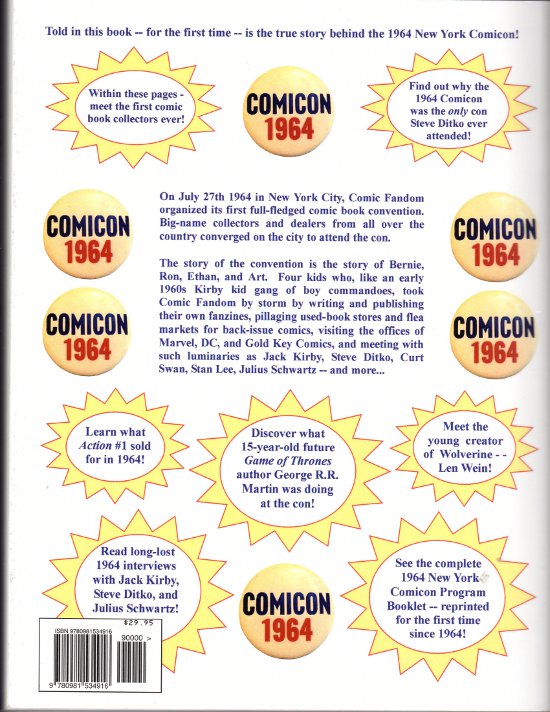 In fact, one of great things about this book, is that it reprints the entire thirty-six (36) page con booklet that was sent to each and every attendee of the show.  Well, technically, there were only thirty-four (34) pages to the com booklet, as the inside covers, both front and back, were blank.

The book has a wealth of information regarding; the planning of the convention, the convention itself, the aforementioned reprinted program booklet, biographies of most of the attendees and lots more!  Here is the con booklet cover itself, in all it’s ditto splendor:

And the back cover, as well, just because it features a nice drawing by comic fan, Ron Foss:

This image is a little harder to see, reproduced from the original ditto booklet, and clearly the master was wearing out by the time this one was printed, as well as, now having faded due to age.  But you should be able to see that it features DC Comics‘ The Atom.

And before I’m done with all the art scans, here is a Thor sketch Jack Kirby provided for the convention program: 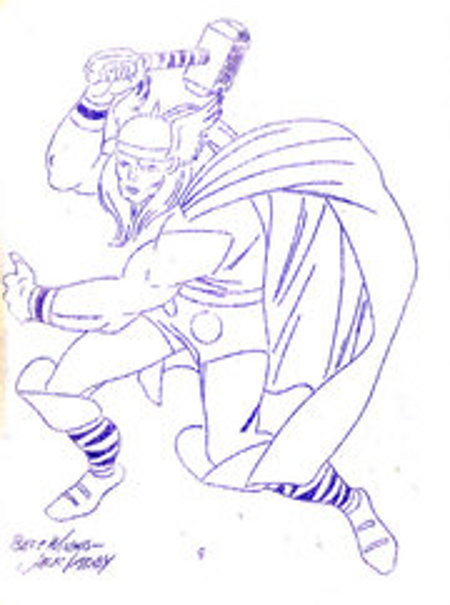 Again, the artwork had to be transferred to a ditto master and then rolled through the drum to create the image, so it isn’t exactly the best Kirby artwork reproduced elsewhere in today’s world.

Not too shabby of a con booklet, a Ditko cover of Spider-Man, an interior Kirby sketch of Thor, plus there were also artwork by a young fan, future professional, Alan Weiss.  Plus a couple of Foss illustrations, two by fan, Buddy Saunders and a sketch given to the organizers by none other than, Curt Swan, featuring, Superman.  Oh yeah, there was also another full page sketch by Ditko of Marvel’s Dr. Strange!

Wow, now that’s a convention program!  There is some discussion of whether this truly was the first comic book convention, as early 1964 (May 24th) fans Bob Brosch and David Szurek hosted a one day convention that about 70 fans attended, but it was advertized as a “Triple Fan” convention attracting fans of science fiction, comics and movies, plus they did not have any industry guests.

The New York convention, held July 27, 1964 had about 56 attendees and had industry guests and was billed strictly as a comic book convention.

So who were this industry guests?  Well the biggest name to attend was, Steve Ditko, himself, though he did not present a panel, but he interacted with all the guest at the show.  Marvel Comics sent over intern Dave Twedt, who gave a talk, telling of upcoming Marvel comics, etc.  And later in the day, Stan Lee‘s secretary, and all around girl Friday, “Fabulous” Flo Steinberg dropped by, after work that day.  Also Dell and Gold Key artist, Tom Gill, gave a one hour “chalk talk” presentation!

Plus the con sported a few comic book back issue dealers, who either brought comics or provided lists of comics for sale.  And of course, a number of the attendees brought comics which they traded with others of like mind.

So who gets the credit for pulling the first comic book convention foo?  Well, would you believe a couple of teenagers?  Yep, a couple of comic book fans by the names of; Bernie Bubnis (age 16), Ron Fradkin (age 16), with a little help from Art Tripp (who was 25 at the time) and Ethan Roberts (age 18).  It was Ethan that secured the hall in downtown Manhattan, that the convention took place in.

One other person you  might be interested in, that attended that day, was future writer, George R.R. Martin, who obviously is famous for the Game of Thrones series of books.

Anyway, I could go on and on, but I better stop here and give you something to discover, if you decide to pick up the book.  Needless to say, I highly recommend it.

So let me say adios, and be sure to come back next week for a new RETRO REVIEW, and then again in two weeks for the next Fabulous Find.  The summer is almost gone, but enjoy what’s left.  Be seeing you …