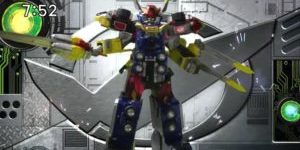 Welcome to Tokusatsu Gesundheit, where your author continues to be busier than expected! This week, we’re talking about the Power Rangers season that wasn’t, 2012’s Tokumei Sentai Go-Busters!

Also, the Vaglass were sucked into hyperspace thirteen years ago, along with the research facility the heroes’ parents worked for – that they’re still means their parents might be too.

Go-Busters is the 36th Super Sentai series, coming after the anniversary extravaganza Kaizoku Sentai Gokaiger. It did a few thing differently from prior series, notably featuring leather costumes over the traditional spandex, and worked in a few elements from Power Rangers (notably calling the mecha “Megazords” and the phrase “It’s Morphin’s Time!”). However, the toys sold like crap and the darker and more complex (…for this franchise) plot turned off the target audience of young kids, marking the series as something of a failure. As such, it became the first series since 1992’s Zyuranger to be entirely skipped by Saban in creating Powers Rangers. 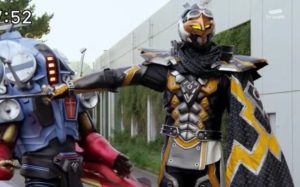 Go-Busters, thought a bit slow to get rolling, has ended up being one of my favorite seasons of Super Sentai (I’ve been watching them straight from Japan for about six seasons now). It’s downfall was, like Young Justice and Freakazoid, was being material better suited to an audience older than the one it was meant to target. 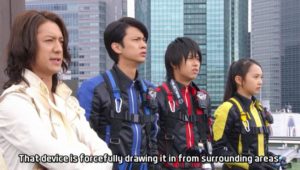 And here are the four human rangers unmorphed.

NEXT WEEK: We return to our regularly scheduled Kikaider REBOOT.