The giant moth herself.

Welcome to Tokusatsu Gesundheit, where your intrepid author was a bit busier than he expected to be this week. As such, we’re going to discuss the 1961 kaiju classic, Mothra!

A joint Japanese/Rolisican (stand-in for the U.S.A.) expedition to a mysterious island and atomic bomb test site in the South Pacific discovers a massive secret forest, a large tribe of natives, and  a pair of one foot high priestesses called the Shobijin (Rolisica didn’t do the most thorough recon before using it as a test site, apparently). A slimy Rolisician businessman kidnaps the Shobijin and makes them the toasts of Tokyo’s performance community…and ignores their insistence that Mothra will come save them. 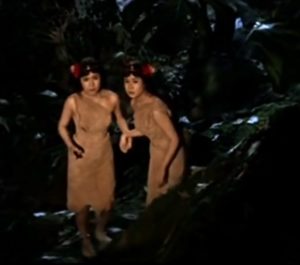 The Shobijin, AKA a portion of the Internet’s deepest desire.

Loosely based on a Japanese novel entitled “The Luminous Fairies and Mothra”, Mothra was an example of Toho cashing in on the giant monster craze they started with Gojira back in 1954. It was directed by Gojira director Ishirō Honda (one of many kaiju pictures he would direct), had special effects from our buddy Eiji Tsuburaya. The intention was to create a somewhat lighter and softer giant monster flick, distinct from what had come before…although it’s also transparently borrowing from King Kong.

Mothra’s a refreshing change of pace, an early kaiju film in which the monster is the hero of the film and wins in the end. It’s a lighter experience than watching the original Godzilla flick, and it introduces Toho’s most recognizable and popular monster next to the King of Monsters himself. Mothra’s a fun watch, and it is recommended highly. 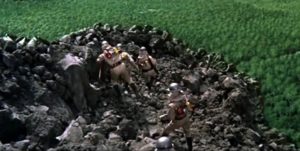 I feel like Rolisicia’s inability to notice this before testing bombs on this island raises questions about their military’s competence.

NEXT WEEK: We’re gonna talk about the minor oddity of Tokumei Sentai Go-Busters, the only Super Sentai series since 1992 to not be used in Power Rangers.