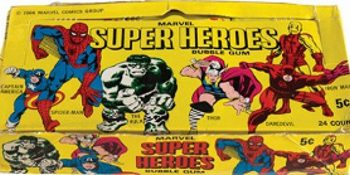 Welcome back true believers. This week it’s time for a new Fabulous Find.  And since I’ve just recently completed my set of the 1966 Marvel Donruss Super Heroes card set, I thought that this would be the perfect time to shine the spotlight on them. This set of cards is the very first set of Marvel cards that were ever produced. The set consists of sixty-six (66) cards. They sold in packs for only five (5) cents a pack and were shipped, and often displayed, in a nicely illustrated box which contained 24 packs.

Here is the box and a few packs for you to see what the original packaging looked like back in 1966: 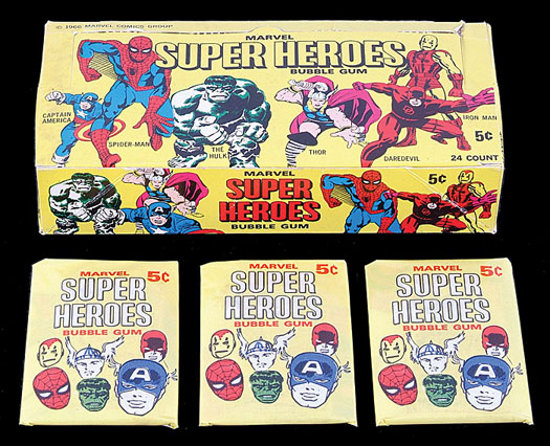 So the above would have been what us Marvel fanatics would have seen back in the day.  The packs sold for the same amount as baseball and football cards sold for in 1966, so they were priced right.  The problem was just finding stores that sold them.  My mom and pop party stores near me where I bought Baseball and football cards rarely stocked items like this and I had to discover them at the five and dime stores like Kresges or Woolworths. 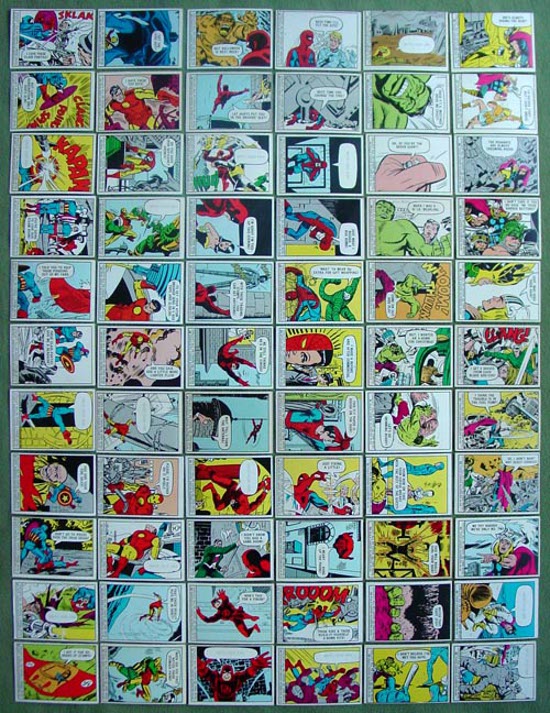 I’ll also include a copy of scans of the nine (9) of the eleven (11) cards that make up the Captain America subset as well as in the Spider-Man subset.  The cards, as you can see included cheesy dialogue and some in each subset had a black box where you could write you own dialogue.  Check it out: 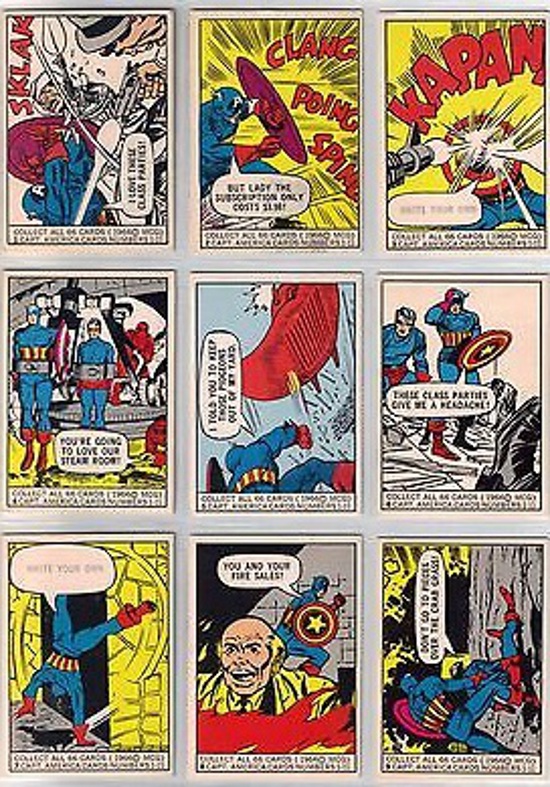 Hopefully, you’ll be able to see the cards a little better.  These are the first nine (9) cards in the set Sorry the scan of the Captain America cards is a little blurier than I would have liked.  Here’s the Spider-Man cards, they are scanned a little better: 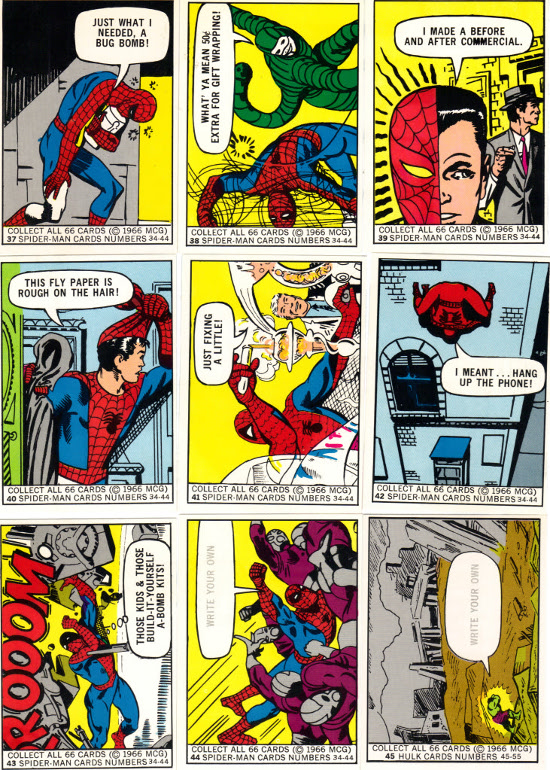 These are cards thirty-seven (37) through forty-five (45).  Oops, there’s a Hulk card at the bottom right (card 45).  If you can’t tell, I’ve scanned the cards as I have them in the nine page Ultra Pro card sleeves.  It would have been nice is Marvel had done nine card subsets instead of eleven so they would have be perfect to display.  But then again, these card sleeves were not even invented back in 1966, were they?

And just because I can, here is a large look at a Daredevil card, number twenty-eight (28) to be exact: 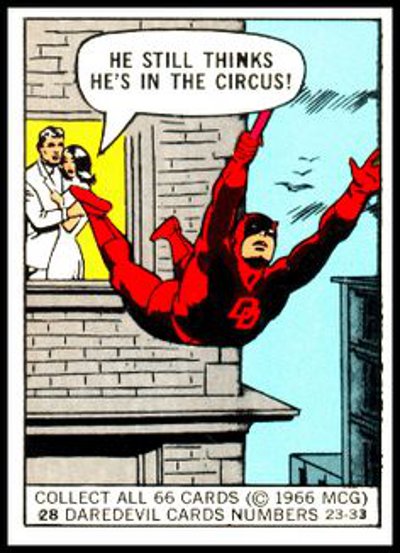 So that should give you a pretty good idea of the first Marvel card set, but one thing I ought to mention is if you put the cards in order, six across and in eleven rows, then turned them over, you got a giant pinup of the featured Marvel Super Heroes!  Take a look: 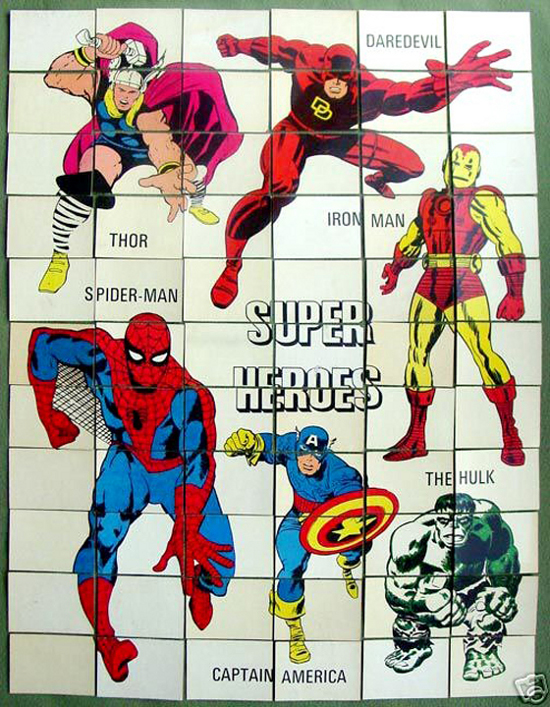 The artwork looks like Jack Kirby did most of the figures, though that is definitely a Steve Ditko Spider-Man figure.  Not sure what happened with the coloring on the Hulk figure, but he’s the the Hulk even if he’s not all green!  Speaking of the coloring, the front of the cards had some coloring difficulties, as well.  But hey, it was the first set that was ever produced featuring Marvel Super-Heroes, so I guess we can cut them some slack.

The set is not that easy to put together almost fifty years later, but it can also be expensive if you want to purchase a complete set of cards.  As I said right up front, I’ve been working on my set for a while.  A couple of the cards could be upgraded to better conditions, as well, but I can finally say my set is complete!

One thing more I should mention is that there is no checklist card for this set.  This is one minor issue but hardly a reason to not appreciate the cards.

I hope you’ve enjoyed this week’s Fabulous Find and my look at the 1966 Marvel Donruss Super Hero card set.  Be sure to return next week for a new RETRO REVIEW, where I’ll be looking at a Marvel comic book, maybe even featuring one of the characters from this early card set.

Happy Thanksgiving to all my readers, friends, fans and family!  Be seeing you …