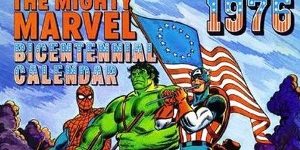 It’s time for another new Fabulous Find.  And since it’s been quite a while since I focused on those great Marvel Comics calendars (in fact it’s been almost four years, see my post, dated August 10, 2012), I think it’s time to look at the second one, from 1976, I bring you The Mighty Marvel Bicentennial Calendar.

Here is the cover: 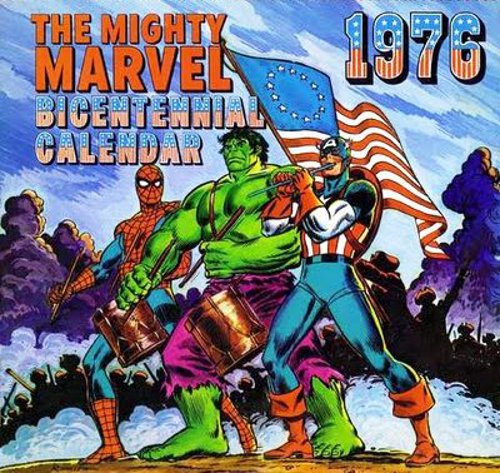 I believe that our three Merry Marvel Marching Society members are drawn by John Romita Sr.  As with the first calendar, each month features a large drawing of various Marvel heroes on the top half and the actual month on the bottom half.  Birthday dates of various Marvel alums are given in the appropriate months and this year there are various drawings of related characters on various days.

For example here is March of 1976, with a nice Black Panther drawing, done by Bob Brown and all of the characters drawn in the actual calendar have to do with the Black Panther.  Also please note that Dan Adkins‘ birthday is March 15th and Val Mayerik‘s is March 29th. 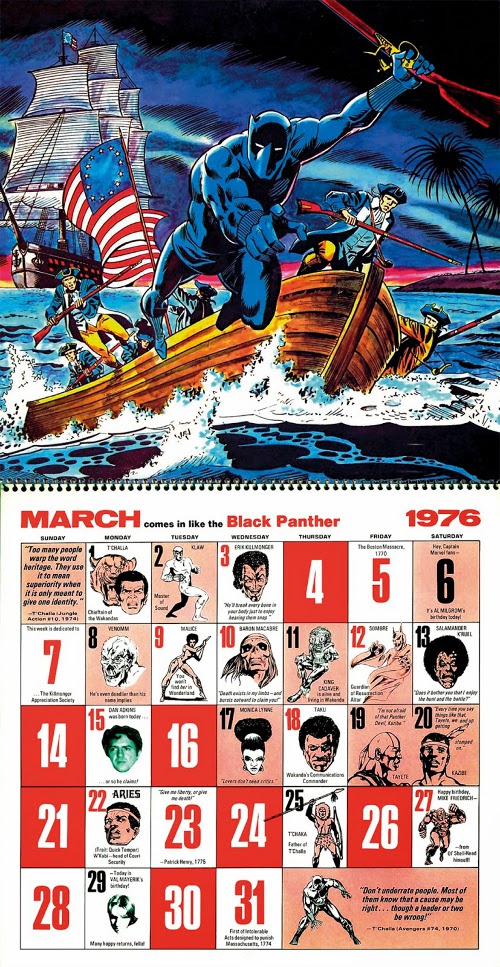 Let’s take a look at May 1976, as drawn by John Buscema, featuring the Mighty Thor: 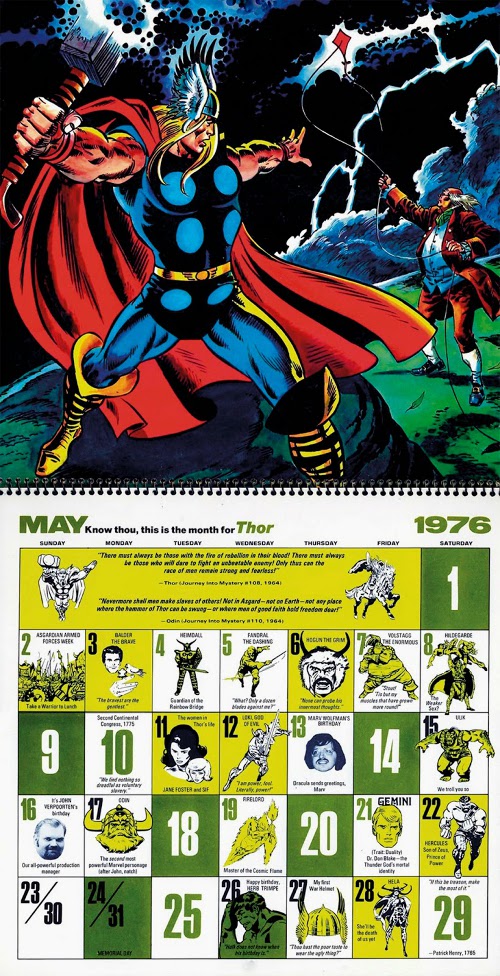 You’ll see that May birthdays include; Marv Wolfman, on the 13th and John Verpoorten on the 16th.  Hopefully you can also see that the Lady Sif and Jane Foster appear this month, as do the Warriors Three, plus Balder the Brave.

And if 1976 was America’s Bicentennial, then I’d be remiss if I didn’t show you July, featuring Captain America (who else, I ask, to represent the 4th of July?).  And our own American Hero is drawn by “Jazzy” John Romita Sr.  July birthdays include; Billy Graham (artist on the Black Panther, not the evangelist) on the 1st of July, inker Frank Giacoia on the 6th and also Mike Esposito on the 14th.  Here is that page from the calendar: 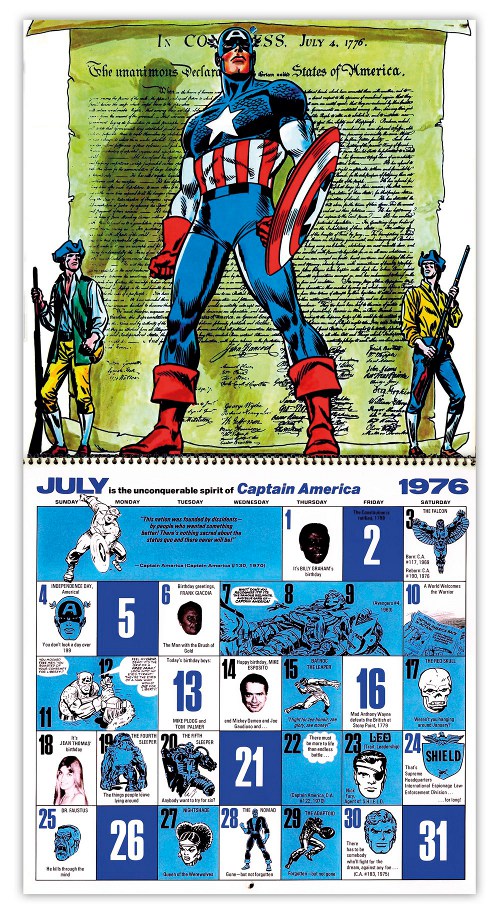 Now let’s jump to November, to maybe my favorite art in the whole calendar.  November is drawn by Jim Starlin and features three of Marvel Comics most cosmic heroes; Warlock, the Silver Surfer and the Captain Marvel.  Enjoy: 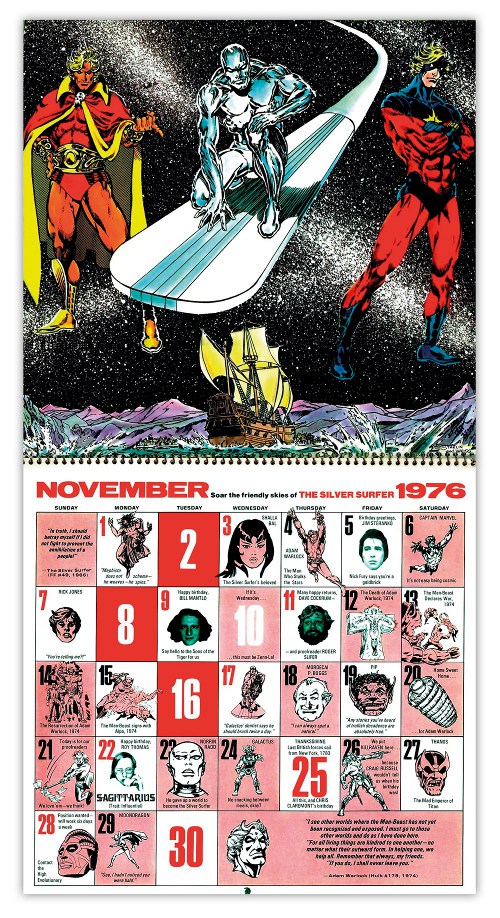 November birthdays are shown for Jim Steranko, on the 5th, writer Bill Mantlo on the 9th, artist Dave Cockrum on the 11th and Roy “the boy” Thomas on November the 22nd.

All of the art for this calendar is great, but I have only enough room to show you a sample of the art, which hopefully gives you the idea for the rest of the calendar.  January is an Invaders piece drawn by Frank Robbins.  February features the Hulk and is by Herb Trimpe.  Gil Kane provides April and it features Conan.  June is Spider-Man by Ross Andru and Mike Esposito.  August is the Fantastic Four’s month and it is drawn by “Joltin'” Joe Sinnott.

September features may Marvel heroes, including; Daredevil, the Black Widow, Dr. Strange, Luke Cage, Son of Satan, Ghost Rider and Shang Chi, the Master of Kung Fu.  It is drawn by John’s little brother, Sal Buscema.  October is all about the Marvel monster characters; Dracula, Man Thing and Werewolf by Night and is drawn by Frank Brunner (who else?).  And finally, December features the Avengers crossing the Delaware with George Washington as drawn by Jim Mooney.

All in all a pretty nice package and it only cost $3.95 back in the day!  Today these calendars can go from twenty to seventy-five dollars when you can find them.

So that wraps up this week’s post, but be sure to return next week (when I’ve returned from Alaska) and a new RETRO REVIEW, and again in two weeks, for another new Fabulous Find.  Be seeing you …