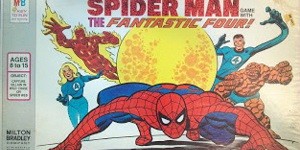 First things first … Happy New Year!  I hope your holidays were great and that the new year brings exciting opportunities to you all.  I’ll check back in twelve months for your report.

But now on to the reason you’re reading this, it’s once again time for a new Fabulous Find.  I hope this excites you as much as me.  My family often gets together on New Years Day to play games and maybe watch a football game or two, so I thought it would be appropriate to share another one of my comic book related boardgames today.

So from 1977, I bring you my Spider-Man with the Fantastic Four board game from Milton Bradley.  I don’t remember exactly when I picked up my copy of the game, but I’m sure it was sometime during the eighties.  It’s got great graphics on the top of the box, drawn by Jazzy John Romita (Sr.), not to be confused with his equally talented son John Romita Jr.  Please take a look: 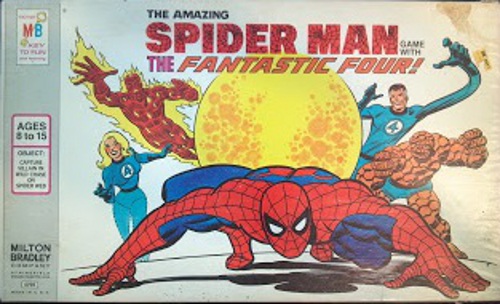 The instructions for the game itself were printed on the inside of the box lid.  I’m sure you won’t be able to read them, but here’s a picture of them. 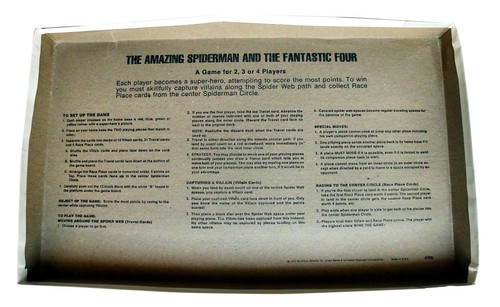 The picture reproduced pretty well, but before you get out your magnifying glass to try to read them, let me give you a quick recap of the object of the game.  As you can see on the cover pic, the object is listed; “To capture villain in wild chase on Spider Web”.  But from the inside, here’s a little more; “Each player becomes a super-hero, attempting to score the most points.  To win you must skillfully capture villains along the Spider Web path and collect Race Place cards from the center Spider-Man Circle.”

To win the player must score the most points, by racing to the center, while capturing villains along the way.  Oh, the game is played with 2, 3 or 4 players.  Each player starts in one of the colored corner sections, represented by Sue (Storm) Richards, Reed Richards, Ben Grimm or Johnny Storm.  Each player has two similarly colored markers and the first person to get both of their pieces into the center web section ends the game.

Points are awarded by getting to the center (first there gets 5 points, second there gets 4 points etc.)  These are the race place cards.  Points are also awarded by the capture of villains along the way.  Different villains are worth different points.  For example, capturing the Ringmaster gets the player 2 points, Prowler gains the player 3 points and capturing the Green Goblin is worth 4 points!

So with all that said, let’s take a look at the board itself. 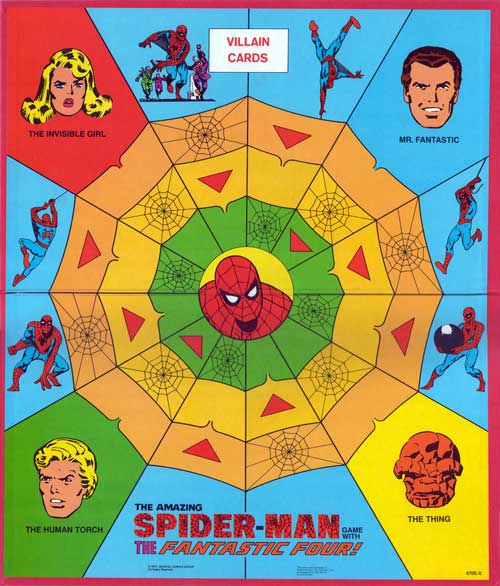 And here is a pic of all the pieces, the board and the box, so you can get a sense of the whole shebang: 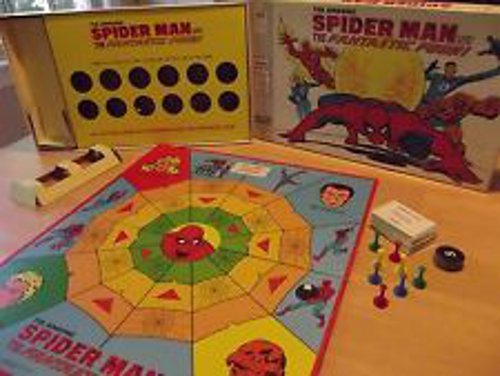 It is not a difficult game by any means and, as the box states, it’s intended for ages 8 to 15.  But that doesn’t mean it can’t still be enjoyed by us older fans, even today!

You might have noticed by the artwork, from the pics above, that the board spotlights a lot of original Steve Ditko artwork on the Spider-Man images around the outside of the board and the Fantastic Four corner space artwork appears to be by John Romita Sr.

This is because this game is actually the second edition.  The first edition of the game was issued ten years earlier, in 1967 and was billed as; The Amazing Spider-Man game with “Marvel Super-Heroes”.  It was really the same game but with a few slight changes.  Here is the box: 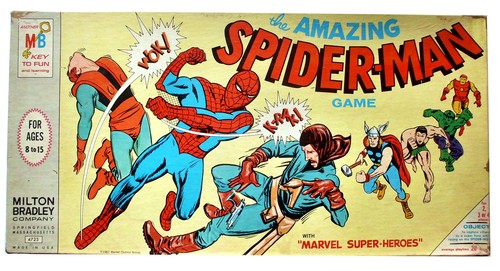 And the board game was slightly different, as well: 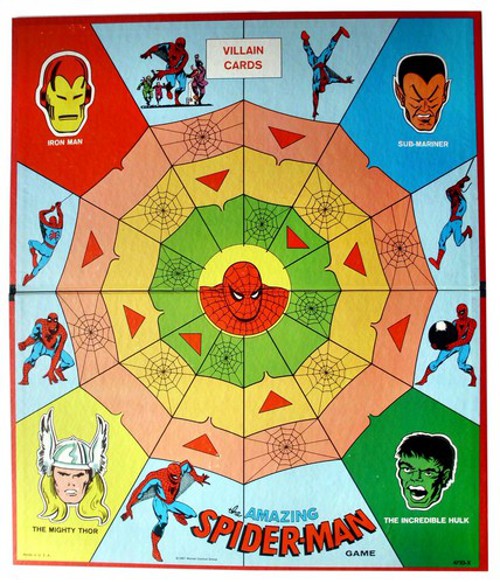 As you can see, the corner spaces have Iron Man, Sub-Mariner, Hulk and Thor.  It does seem odd that for the blue corner space, they used Sub-Mariner, rather than the more obvious color coordinated; Captain America.

So for the second edition game, they simply removed the Marvel Super-Heroes from the corner spots and replaced them with the Fantastic Four members.  One other thing you’ll notice is you look closely is that they also replaced the original Spider-Man image in the center of the board, as well.  I will admit the 1977 pic looks a little better than the 1967 version, so I guess it wasn’t that much of a change, but it was an improvement never the less.

So what do you think?  Want to challenge me to a game?

Thanks for stopping by, and be sure to come back next week for a new RETRO REVIEW.  And of course I’ll be back in two weeks with another Fabulous Find.

So once again, Happy New Year!  I hope it will be a fabulous one for you!  Hey, and for me too!