1 out of 5 – Would Recommend: Battle Beyond The Stars 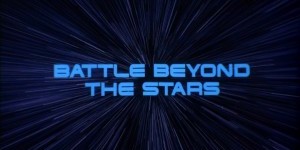 Welcome back to 1 out of 5 – Would Recommend, where I’ve had the acapella version of the Imperial March stuck in my head for over a week. In celebration of the new Star Wars movie currently devouring the world’s money, we’re taking a look at Roger Corman’s attempt to cash in on the original craze – 1980’s Battle Beyond The Stars.

When the evil Sador (A Nightmare on Elm Street’s John Saxon) threatens to destroy the peaceful hippy planet of Akir, young Akiran Shad must venture forth into the universe to find mercenaries that can protect their world. He finds approximately seven, who stand with the small population of Akir to fend off Sador’s overwhelming force.

If all of that sounds kinda familiar, know that the film’s Spanish title is Los 7 Magníficos del Espacio.

This movie was, as mentioned before, produced by the one and only Roger Corman (whose films have graced these pages before). More impressive though is the film’s crew – assistant production manager Gale Anne Hurd (who would go on to produce the Terminator franchise, Aliens, The Abyss, Tremors, and The Walking Dead TV series among many others), composer James Horner (who would compose music for Star Trek II & III, Amazing Spider-Man, The Rocketeer, Aliens, Titanic, and Avatar among many others), and art director James Cameron (who would marry Hurd and direct some of the most successful movies in the history of film – working often with Hurd and Horner).

Eh, it’s OK. Neither the writing nor the acting are strong enough to make it particularly interesting (unlike Death Race 2000) but the special effects are too good to make it ridiculously silly (unlike Corman’s Fantastic Four), but it’s the kind of movie you would sit down to watch in syndication on a rainy Saturday. Fun, but not something to run out and get. 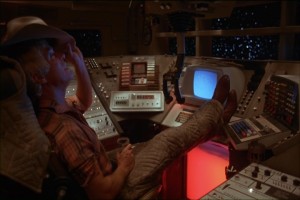 Oh, A-Team star George Peppard is in this movie. And he’s pretty useless.