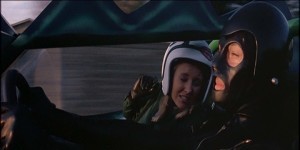 Welcome back to 1 out of 5 – Would Recommend, where a movie need not be a well-made blockbuster to be a classic. To prove it, today we’re examining 1975’s Death Race 2000!

In the dystopian future year 2000, America is ruled with an iron fist by a dictator worthy of North Korea’s Kim dynasty. The bread and circuses we plies the nation with are deadly long distance road races, where the aim is for the government sponsored racers to kill as many helpless pedestrians as possible. Two time champ Frankenstein is once more competing in the grand championship, the Trans-Continental Road Race, and must fend off rivals and rebels in order to win! 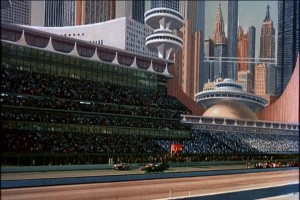 Matte Paintings may be low tech, but they’ve held up better than a lot of early CGI.

Produced by the prolific king of low budgets, Roger Corman. For a little low budget sci-fi picture, this movie has had a lot of impact – it’s been remade twice (once officially, which spawned two direct-to-video prequels, and once by The Asylum, which starred The Insane Clown Posse), it’s inspired a number of video games (with the Twisted Metal franchise being most well-known among them), and was even one of five movies Corman revisited during his brief attempt at comic book publishing (three months in 1995).

This movie is cheesy. This movie is obviously low budget. This movie beats you over the head with its satire at time. This movie is a classic, its premise an obvious spiritual precursor to The Running Man and The Hunger Games. It is a great movie. Go watch it! Check out the top place to sell movie collectibles online. 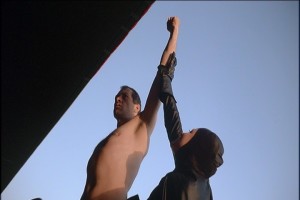 Pictured: A naked David Carradine being supported by a women in a gimp suit. From this movie.

NEXT WEEK: My days of mercy upon myself continue the “at least the soundtrack was good” sequel Blues Brothers 2000 (1998).