Welcome back to another Friday Fabulous Find and yes, I am aware that this is two Fabulous Finds in a row!  No secret agenda, simply I felt like doing another Fabulous Find!  And this week I feel like going way back, over fifty years, as a matter of fact, to 1965, when we saw the publication of the fanzine Alter Ego # 8, dated Winter 1965.  The publishing editor was none other than Roy Thomas with  the art editor being; Biljo White.

Roy was still in Missouri at the time and had not yet moved to New York to start his professional career. Biljo was also in Missouri, working as a firefighter, so working on the fanzine face to face was possible and likely what took place, at least part of the time.  I do not believe that they lived in the same city though.  This issue of Alter Ego came out at about the same time as Biljo’s Batmania # 4.  There is even an ad for that fanzine on page fourteen (14). 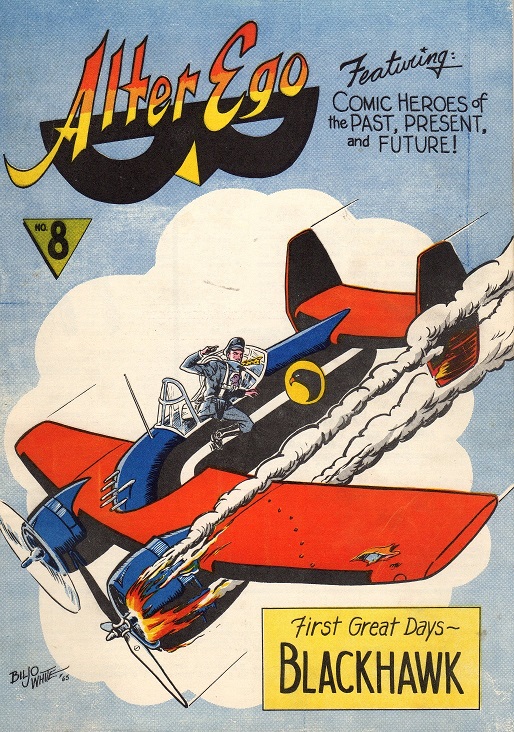 So what’s in this issue?  Well to start the cover features Blackhawk, as drawn by Biljo White.  Biljo also provided the back cover, featuring Alter and Captain Ego.  Page two sports a Table of Contents.with a small Mike Vosburg drawing of Bulletman.   Starting on page 3 is an editorial, written by Roy which runs over onto page 4.  This page also contains an ad for “The Bestest From Alter Ego # 1 – 3″, which reprinted work form the first three issues of this very fanzine.  Art in the ad is by Roy.

The longest feature in the fanzine is a nine (9) page strip featuring; The Eclipse, written by Drury Moroz, with artwork by Ron Foss.  This alone is worth the price of admission.  Foss never became a professional comic book artist, but he provides excellent amateur artwork on this character, than he himself created for fandom!

Following the comic pages is another article, entitled; “Es Supermen South!”.  The article looks at the super-hero comics from Mexico.  It is written by Fred Patten and runs five (5) pages.  The article says this is the first of two articles, but only part one appears in this issue.  Next is a one (1) page message from Paul Gambaccini, the Executive Secretary for the Academy of Comic Book Fans and Collectors (A.C.B.F.A.C.).  This page also includes a small ad for The Comic Reader, another fine fanzine.

We’re not done yet, folks!  Next, we have a another four (4) page article entitled;Two Cases of Conscience”, written by Glen Johnson with illustrations by Biljo White.  This is the second part of a series looking at the justice Society of America.  Part one appeared in an earlier issue.  Things wrap up nicely with a six (6) page letters section entitled, simply; “re:”.  Letters of note are printed from Ron Foss,  Wendell Crowley (former editor on Fawcett’s Captain Marvel), Otto Binder (professional comic book writer), Mort Weisinger (DC Comics editor), Steve Ditko (Marvel Comics artist on Spider-Man and Doctor Strange), Gardner Fox (DC writer), Richard Lupoff (big name SF fan and early comic book fan), Richard Kyle (fanzine publisher) and Kurt Schaffenberger (DC artist).  That’s quite a who’s who of people involved with comics and fanzines back in 1965!

One other thing to note is that there are several humorous cartoons written and drawn by a J. Kinney.  I am not sure if these might be by future underground cartoonist Jay Kinney, or not.  Anyone know?  So that wraps up the forty (40) page fanzine published by Roy back in 1965.  A pretty nice package and well worth the seventy-five (75) cents it cost in the fall of 1965.

And that also wraps up this edition of Fabulous Finds, please come back next week for a new RETRO REVIEW, or who knows, maybe another new Fabulous Find.  I guess you’ll have to tune in to find out.  Goodnight Mr. and Mrs. America and all the ships at sea.   be seeing  you …