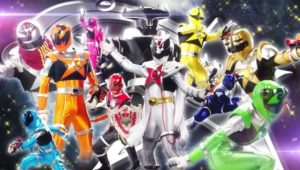 Welcome to Tokusatsu Gesundheit, where I am incredibly excited that the second entry in the Space Squad V-Cinema series, Uchu Sentai Kyuranger vs. Space Squad, has been released!

In “our” dimension, Space Squad commander Space Sheriff Gavan has dispatched Space Sheriff Shaider and a brand new World Ninja Jiraiya to bring in one of Genmaku’s Apostles, Space Ninja Demost. They have him overpowered, but Demost escapes through a dimensional rift. Shaider gives pursuit, but the rift closes before Jiraiya can do likewise. 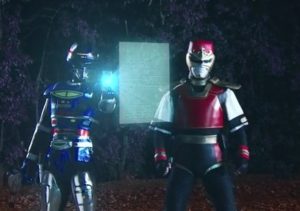 Four years after the events of Kyuranger (and therefore after the first Space Squad flick, since they crossed over), their dimension is at peace. Phoenix Soldier, now president of the Galactic Federation, unveils a potentially life-saving new invention – the artificial Neo-Kyutama. They are stolen by Hammy, his former Kyuranger teammate, leading the massive team to split down the middle as some side with Hammy and other try to bring her to justice.

This continues the Space Squad series of direct-to-video movies, which is as a kind of All-Star Squadron style team-up between the Super Sentai teams and the Metal Heroes.

This is 90% a Kyuranger movie, which suits me just fine since Kyuranger is easily one of the best seasons since I started watching Sentai. Teaming them up with the Space Squad allowed them to have a reunion movie that didn’t undo or lessen their hard won happy ending, as it’s an enemy from outside their circumstances (and not a remnant of Jark Matter) that brings them bak together.

That said, I will be very happy if the more Metal Heroes focused entry teased by the post-credits scene comes to pass.