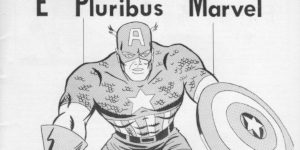 Welcome back to another Fabulous Find!  I guess I’m just in a fabulous fanzine state of mind, so this week I’ve brought an “oldie, but goody” to light.  Behold; E Pluribus Marvel # 5, published back in 1968, by editor Jay Zaremba.  This fanzine is now fifty (50) years old, as a matter of fact and it makes me feel just a little bit old, myself!  It definitely features a nice cover by fan artist; Al Grinage Jr. of Marvel Comics’ Captain America.  Take a look: 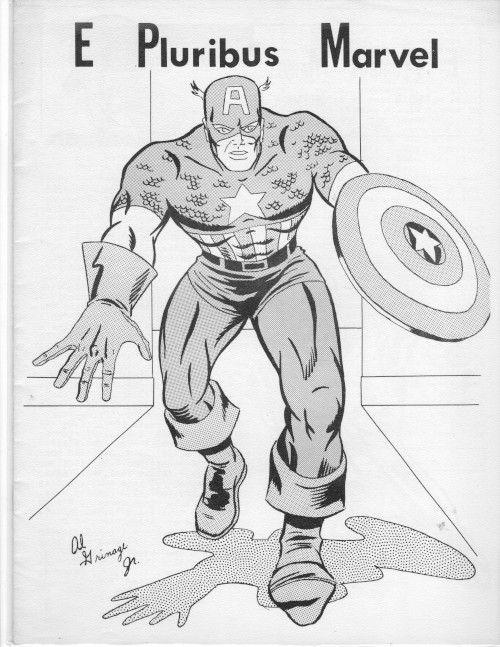 Other fan artists that have artwork in this issue are, Dave Russell, Ted White, Mike Robertson, Max Gottfried, Bob Gale and Mike O’Neal.  Also there is one small illustration by future pro; Klaus Janson, if you are keeping score!

Things start off with the typical fanzine editorial by Zaremba, welcoming new readers and providing the names of the contributors to this issue of the fanzine.  Then we get a one (1) page article entitled; “On Negroes In Comics”, written by Warren Bluhm and focusing on Marvel Comics.  Following that is a three (3) page article entitled; “Spider-Man versus Hawk & Dove” by Dave Perry and John Crawford.  They actually give the, then new, Steve Ditko DC Comics series pretty good marks.  Though as we now now, the series didn’t succeed, unfortunately.

Next up is “A Study of The Thing”, a three (3) page article written by Bob Gale, focusing on, you guessed it, The Thing from the Fantastic Four, of all things!  Following that is the longest article of the fanzine, a six and a half (6 1/2) pager entitled; “A Look At National Comics” from future pro; Tony Isabella.  Zaremba wraps things up with a short few final comments and the sixteen (16) page fanzine is finished.

Short but sweet.  It’s a nice package with good articles and pretty good fan art throughout the fanzine.  Well worth owning if you ever come across it.  There were only just five (5) issues in it’s total run, though Zaremba did reprint the first three issues in one combined package at one point.  It looks like he was trying to expand outside of the Marvel Comics field, which was all the first four (4) issues covered, as you can see by my coverage of issue five, with it’s long look at DC by Isabella.  But whether he didn’t get enough interest from fellow fans or he just lost interest in publishing a fanzine, I guess we’ll never know!

Make sure you return next week for either another Fabulous Find or a new RETRO REVIEW.  I’m not sure which it will be, but God willing and the creek don’t rise, I’ll be back with something!

Take care, my friends and stay well and happy!  be seeing you …