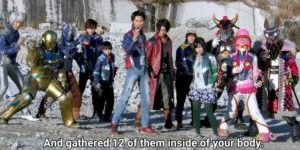 Welcome back to Tokusatsu Gesundheit, where today we’re talking about the final run of episodes of Uchuu Sentai Kyuranger (see previous posts for more info).

The Red Ranger, Lucky, leads his friends in saving the universe from Jark Matter. Along the way he finds out he’s a prince, the Silver Ranger turns evil for a few episodes, the Kyurangers rewrite history, the team’s mentor stays in the past and returns the slow way, Lucky gets a power up (a form called “Shishi Red Orion” despite the white costume), the team gets a new battleship headquarters that turns into a megazord (piloted by Shishi Red Orion), and they meet the Space King of Pop.

Yeah, despite being the largest team of rangers to date, Kyuranger really focused on Lucky. He was the descendant of HouHou Soldier’s second-in-command, he was the prince of the Leo star system, he had to free his dad from Jark Matter’s control, he got a Kyutama that combined everyone else’s powers, etc, etc. It wasn’t poorly done, other characters did get focus episodes and plotlines, and it’s fat from uncommon for the franchise…but man is it noticeable with 12 ranger team.

Overall, Kyuranger was a very fun series and I’m sad to see it go. Sure, its team was a tad jam packed but the next series, Kaitou Sentai Lupinranger VS Keisatsu Sentai Patranger, promises to be similarly so – it has started with two rival teams of three rangers each with extra rangers already announced for both. Perhaps this marks a change in direction in terms of team size – time will tell.