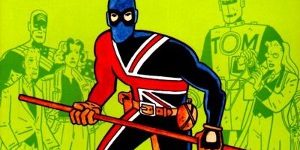 So we meet again.  This week’s RETRO REVIEW features an independent comic book from Dancing Elephant Press.  The comic is Jack Staff # 1 and it is cover dated April 2000.  The comic was created, written and drawn by writer/artist Paul Grist.  Or as it says on the interior of the front cover; Paul “The Knave” Grist!  Someone must have been reading Marvel Comics back in the 60’s heyday!  I also believe that Dancing Elephant was a self-imprint of Mr. Grist and that this series of comics was self-published.

Here is the cover for that first Dancing Elephant Press comic: 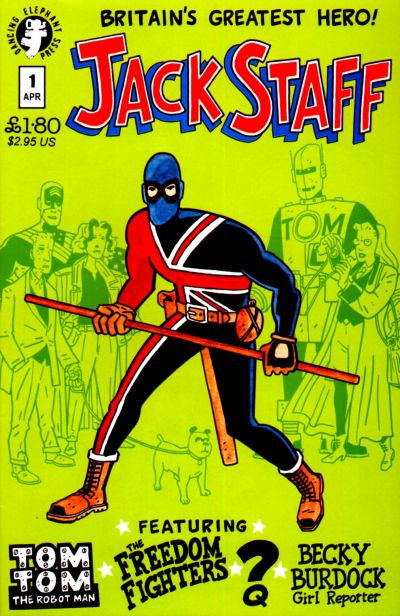 I had first became familiar with Grist when I picked up an issue of Kane, a police story/comic that he wrote and drew.  I liked it so I tracked down all of the back issues.  Kane was also published by Dancing Elephant press and ran thirty-one (31) issues, published between 1993 and 2001.  As I said, I enjoyed that character and storyline, so I thought I’d see what Grist could do in the super-hero field.

The comic is primarily a black and white comic, with the exception that two (2) pages are printed in color; pages twelve (12) and seventeen (17).  Page twelve is a stand alone pin-up of Jack Staff and page seventeen is also a pin-up that  introduces the readers to the Q Investigation team, a team that investigate the unexplainable!

But let’s go back to the beginning of the comic.  We are first introduced to John Smith, builder, who is hard a work rebuilding damage caused to to the city of Castletown in the aftermath of a battle between super-hero Tom-Tom the Robot Man and Doc Tempest, so so-called Weather Wizard.  We also first meet Becky Burdock, Girl Reporter, who comes looking for the owner of a van blocking her parking space.

A sign topples from atop a building and John Smith must use some acrobatic skills to save Becky from the falling debris.  She is carrying a picture of Jack Staff.  Immediately Grist tosses in a flashback to 1940 and we are introduced to the Freedom Fighters, whom Jack Staff was a member.  The Freedom Fighters are digging through the remains from a bombing raid.  Pulling out people trapped in the debris and also uncovering a body that had been drained of blood!

Grist then jumps us back to the present, where John Smith is chatting up Becky Burdock about the disappearance of heroes and Jack Staff in particular.  Becky leaves for a meeting with her editor, who tells her to drop the lost heroes story and to concentrate on the Slasher killings that have taken place recently.  Two women have turned up with their throat’s cut and their blood drained!

Here is one of the interior pages form this issue: 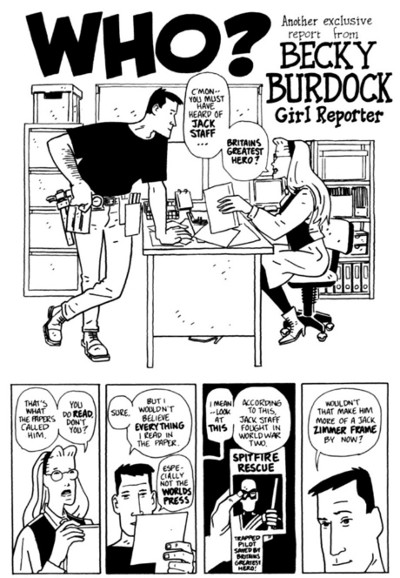 Once again Grist changes locals abruptly, and he introduces us to the Q Investigations team, who also are investigating the recent slasher killings.  Then quickly, it’s back to Becky and then just as quickly, Grist introduces the readers to Tom-Tom the Robot Man, another hero investigating the Slasher/Vampire business.  And finally on the last page, we see the first appearance of the title’s hero; Jack Staff!

Wow, Grist covered a whole lot of ground in this single first issue.  I was certainly intrigued and hooked enough to buy all the issues that followed, both from Dancing Elephant, as well as, Image!

I bet a lot of my readers have never heard of Paul Grist, who resides in England, or this series, but I highly recommend it to you!  I know the Kane stories were collected in trade paperback and I think at least the Dancing Elephant series also was published in trade dress.  So that might be the way to go, rather than trying to find all of the individual issues, but either way, well worth your time!

One last thing, a drawn self-portrait of Paul Grist and his character; Jack Staff from the inside front cover: 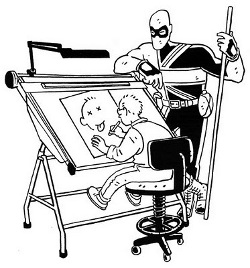 That’s all folks, be sure to return next week for a new Fabulous Find and again in two weeks for yet another RETRO REVIEW.  Til then, be seeing you …