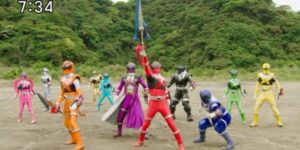 Welcome to Tokusatsu Gesundheit, where I didn’t feel like spending my beautiful day off reading a movie script this week. Instead, we’ll be checking back in with Uchu Sentai Kyuranger, now approximately halfway through its run.

The Kyuranger team is now full assembled (and then some) and deep into its war with Jark Matter! They unlocked new and more weapons and zords, they’ve blown up at least two high ranking Jark Matter generals, and they’re well on their way to freeing the galaxy. 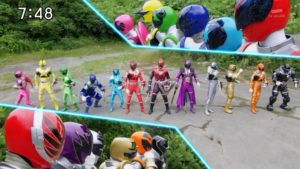 “Kyuranger” is kind of a pun in Japanese, as “Kyu” can apparently mean sphere (what they transform with), savior (what they are), star sign (what they are themed on), or nine (how many rangers they started with). However, like most every Sentai since 1992’s Zyuranger introduced its DragonRanger (known in the U.S. as “Tommy the Green Ranger”), it has added extras and the count is up to a truly excessive twelve Power Rangers.

The series is still pretty great, and since I’m still only about halfway through its predecessor, I’d definitely call it an improvement over last year. 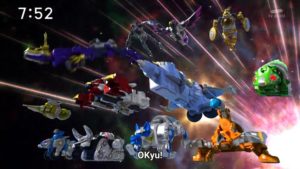 This is nowhere near the all-time Zords record, though.