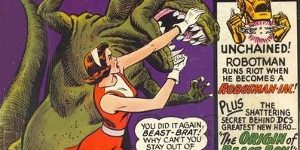 Welcome back to a new RETRO REVIEW!  And this week, I am looking at Doom Patrol # 100, cover dated December 1965 from DC Comics.  The comic sports a cover both pencilled and inked by Bob Brown and features Elasti-Girl battling a dinosaur!  I don’t know what it was about DC back in the Silver Age, but their editors swore that by putting a dinosaur on the cover it would sell more copies.  I guess young boys in the sixties loved those dinosaurs, though I do not remember having any love for dinosaurs during my childhood, it was the heroes in the comics that got my attention. 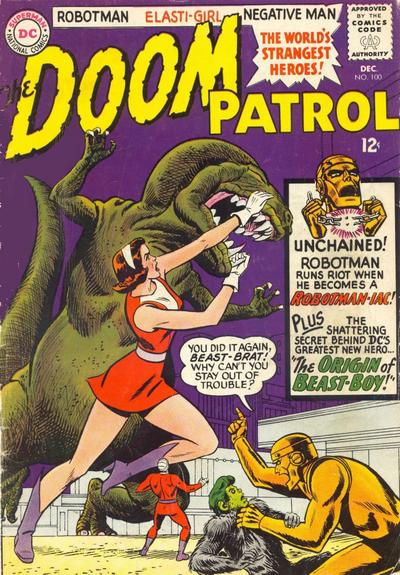 There are actually two stories within this issue, the first is; “The Fantastic Origin Of Beast-Boy” and the second is; “Robotman – – Wanted Dead Or Alive”.  I guess we ought to start with the first one.  It is told in two parts, spanning sixteen (16) pages.  The story is written by Arnold Drake and both pencilled and inked by Bruno Premiani.

Things open with a bang, as Beast-Boy is back (He first appeared in the previous issue, # 99).  He wants to join the Doom Patrol, but Niles Calder and the rest of the Doom Patrol do not want any part of him as a fellow teammate.  The first two pages have Robotman and Beast-Boy sparring.

Beast-Boy returns to his guardian, who introduces him to Dr. Weir.  Things start to get weird when a dinosaur appears in the middle of town and goes on a rampage, then a pterodactyl appears and the Doom Patrol leap into action!  Using and losing his arm, Robotman defeats the first dinosaur with a little help from Elasti-Girl.

In chapter two, the Doom Patrol, as well as, the reader, learn the origin of Beast-Boy.  As a young child he falls extremely ill and his scientist father uses some sort of evolutionary ray to save his son, though it turns him green and ends up giving him the ability to change into any animal he can think of.  His parents die a short time later, as their canoe is washed over a waterfall.  Beast-Boy is able to save himself by changing into a bird and flying to safety.

The Doom Patrol team up with Beast-Boy to defeat Dr. Weir, who is the person who is controlling the dinosaurs. Though it is never explained where the dinosaurs came from or how Weir brought them to life or from the past.  Ah, the sixties were simpler times, especially at DC Comics!

The second story runs just eight (8) pages and features Robotman in a solo story.  It is billed as an untold story, in fact, so it takes place in the past, before the formation of the Doom Patrol.  This story is also written by Arnold Drake and pencilled and inked by Bruno Premiani.

The story recaps Robotman’s origin and covers his first meeting with Dr. Niles Calder.  It’s not that interesting of a story and actually contradicts his origin that was told in My Greatest Adventure # 80, which was the first appearance of the Doom Patrol in comic books.

I guess two origins in one book was worth the twelve (12) cent cover price back in 1965.  I know I’ve always had a soft spot for the Doom Patrol, though I was never a big fan of Beast-Boy, who went on to stardom within the pages of the New Teen Titans!

That’s it for this week.  Please join me next week for a new Fabulous Find and I’ll be back in two weeks with another new RETRO REVIEW.  Enjoy the rest of summer and I’ll … be seeing you …