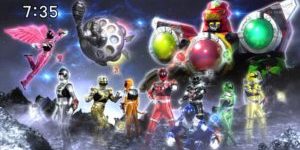 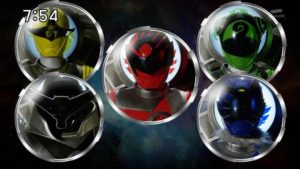 Welcome to Tokusatsu Gesundheit, where we’re on the cutting edge of Super Sentai! The very first episode of Uchu Sentai Kyuranger recently aired in Japan, and we’re gonna talk about it today.

The evil Space Shogunate Jark Matter has conquered 88 constellations, effectively giving them control of the universe! Their newest conquest is a little blue marble called Earth, where they are opposed by the only rebel group with the power to put them in their place – the Kyurangers.

Uchu Sentai Kyuranger debuted on TV Asahi on 2/12/17, as part of the Super Hero Time block alongside Kamen Rider Ex-Aid. While seasons of Super Sentai usually start with three or five rangers and add from there, usually but not always topping out at six, Kyuranger pretty well shatters that mold – in the opening credits of episode one, there are NINE rangers with two more already announced. 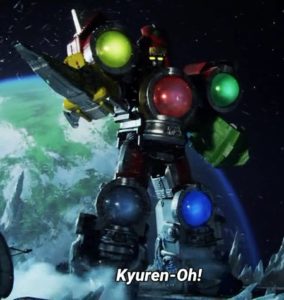 While part of the series storyline will be gathering all nine rangers (incidentally, “Kyu” apparently means “Nine”, so that’s all nine Nine Rangers), that’s still a record.

It’s a strong start to the series, setting up an interesting plot and taking the highly unusual step of taking the action almost immediately away from Earth. It doesn’t introduce all nine rangers in episode one, keeping the debut from feeling too crowded, but makes so little secret who the nine are that it’s clear they’re coming soon.

See you next week for another installment of Strange Times & Places!