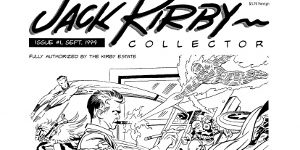 To put it simply … it’s time for a new Fabulous Find.  So who am I to deny you that pleasure?  So without further ado, I present for your interest The Jack Kirby Collector # 1, cover dated September 1994.  This little fanzine, which would grow to so much more is just a few short years, and is still being published today (issue # 70 is scheduled to arrive in my mailbox and your local comic book shop within a week or two).

But back in 1994, editor, John Morrow, conceived a small self-published fanzine featuring the work of artist, Jack Kirby, that as he said; “was a new publication for and by collectors of Jack Kirby’s work, just a year after Kirby’s death in 1993.  John worked up a rough version of the fanzine and even sent it to Jack’s widow, Roz Kirby, for her approval.  Needless to say, she graciously gave her approval and put John in touch with the Kirby’s friend,artist, Greg Theakston.

Greg provided John with his advice, expertise, and maybe more importantly, access to an archive of Kirby artwork.  John went on to say that he was hoping to keep Kirby fandom “alive, active and unified”.  Twenty-three years and seventy (70) issues later, and I’d say he has succeeded beyond his wildest dreams!  And we Jack Kirby fans are grateful!

So what did that first issue look like?  Well, take a look at the cover: 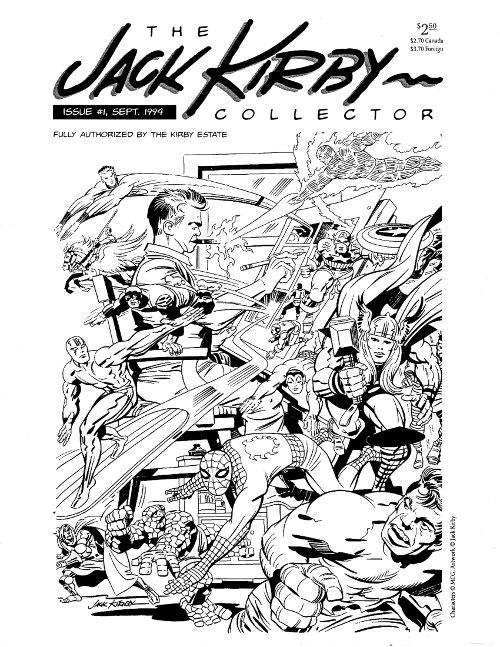 There was probably not a better choice to publish on the very first cover that Jack’s own self portrait, which he had done while still at Marvel Comics, back in the sixties!  It features Jack at his drawing board, surrounded by many of his most famous creations leaping from his imagination and the board itself.

The fanzine was only sixteen (16) pages printed in black and white, but from this small, humble beginning a truly wonderful fanzine has grown over the years.  This first issue gave readers an update on a couple of sets of collector’s cards due out shortly.  It also made us aware of a softcover book, entitled; “Jack Kirby’s Heroes and Villains” that reproduced a sketchbook that Jack did for Roz during the 70s.  I really wished I had bought this back then, but over the years I have been able to see a lot of the pages within the Jack Kirby Collector itself.  We also read about Mark Evanier‘s Kirby book project which finally saw publication in 2008, as Kirby, King of Comics (I do have that book in my library).

The fanzine included Jack’s finished pencil artwork and sketches from various sources, as well as short articles written by Morrow and others.  The highlight for me was the Captain America and Silver Surfer poster reproductions from the 19″ x 26″ poster being sold at conventions back in the seventies, sweet!  But there was something for everyone in this first issue, as it featured some of Jack’s Marvel and DC Comics material.

The first five issues ran just sixteen (16) pages, but issue number six (6) jumped to thirty-six (36) pages.  Issue eight (8) added color covers.  Issue nineteen (19) supplied four (4) pages of interior color too.  Though this was just an occasional treat.  But with issue number thirty-one, big changes were in store, as the size of the fanzine went from 8 1/2 x 11 to a whopping 10 x 14 and jumped to a page count of 84!

Quite an evolution to a small fanzine that published it’s first issue in 1994.  Hope you’ve enjoyed my brief look at it’s very first issue.  Please be sure to return next week for a new RETRO REVIEW and of course, be back in two weeks for another Fabulous Find.