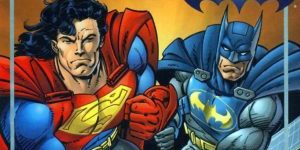 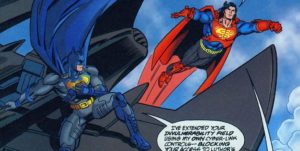 Welcome back to Strange Times & Places, where today we’re looking at a one-shot exclusively available with a toy. The cover designates it Superman: The Man of Steel Co-Starring Batman #1, but it is better known by the name in its indicia – Doom Link!

It’s a Royale with Cheese, where a lot of little differences stack up to create a vastly different DC Universe. Highlights: Clark Kent works for the Planet Online News Service, Batman operates out of Metropolis and directly alongside Batman, and the world is suffused with Kryptonite radiation necessitating the use of force field generating armor by the World’s Finest.

Lex Luthor, or Marvel’s Vulture. Could go either way.

Renegade arms dealer Lex Luthor attempts to lure Batman & Superman to his secret lair, where he will use his own high technology to steal the secret of the Cyber-Link armor. This will give him a two-fold benefit – the death of the World’s Finest team and a massively profitable new weapon for him to sell. It will take all of Superman & Batman’s talent and skill to put Luthor back in his place, but they’re no doubt up to the task! 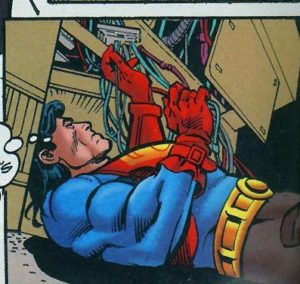 This 11 page tale was written as an insert to the Cyber-link Superman/Cyber-link Batman Two-Pack from Kenner’s Superman: The Man of Steel action figure line. As such, this 1995 one-shot is not up to the typical standards of its writer Christopher Priest (currently writing Deathstroke twice monthly at DC), intended as a Super Friends-esque tale for the kids.

That said, there’s far more thought put into how this world is different than the format would actually require. Why Batman & Superman work together, why they wear armor with force field capabilities, what Lex Luthor’s super-villainous deal is, and even an updated-for-the-high-tech-setting workplace for Clark Kent are all explained either in the story or the profile pages afterward. It could readily be the pitch for an animated series, supplying far more detail than the “here’s why the action figures dress like this” premise needs. 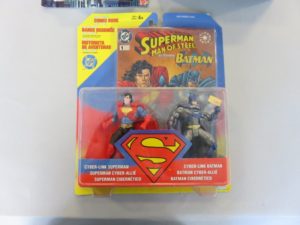 Incidentally, the Cyber-Link two-pack will be coming to auction (alongside two other action figure multipacks) in Saturday’s Vintage Comic Books, Toys, & Collectibles auction. Check out the catalog and submit your prebids now.

See you next week for Tokusatsu Gesundheit!