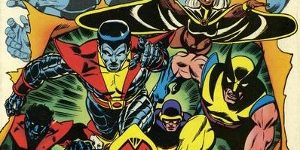 I found myself wandering up and down the Marvel Comics section of my secret comic book vault this week trying to decide on just the right comic for this week’s RETRO REVIEW.  The more I thought, the harder it was to decide, until finally, I came to the end of the row and reached the X-Men shelves.  Okay, so I’ll do a review on an X-Men book, but which one?  Then it finally hit me, I’ve never reviewed Giant-Size X-Men # 1, the very book that revitalized the X-Men franchise for Marvel.  So it was settled!  So hold onto your seats and let us begin …

But first, just a little back story, leading up to Giant-Size X-Men hitting the stands.  The last issue of the new stories of the X-Men had ended with the 66th issue of their original run, cover dated March 1970.  Then for eight (8) months there were no X-Men comics on the stands.  Then, cover dated December 1970, X-Men # 67 appeared on the newsstands, but the comic didn’t have new stories, nope!  Marvel brought back the X-Men book as a reprint book.  And it remained that way, published every other month, until issue # 93, cover dated June 1975.  For twenty-seven (27) issues the book reprinted earlier X-Men adventures.

But that changed with the appearance of Giant-Size X-Men # 1, cover dated July 1975.  In a comic book that boasted “68 big pages”, nothing would ever be the same in the world of the X-Men, or Marvel Comics!  The first story ran 36 pages and was titled; “Second Genesis”.  It was written by Len Wein, with uncredited plot assistance from Chris Claremont and the pencils and inks were done by Dave Cockrum.

The rest of the book was make up of three reprint stories, featuring individual X-Men; Cyclops, Iceman and Marvel Girl which were reprinted from X-Men # 43, 47 & 57.

I’m sure everyone has seen the cover to the book, as drawn by Gil Kane (who penciled the new X-Men portion) and Dave Cockrum (who pencilled the original team in the background).  Dave Cockrum also inked the total cover. 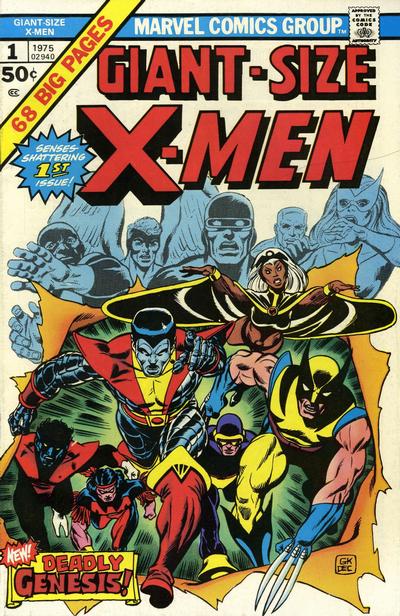 I must say, that this cover has truly become an iconic cover in the history of Marvel Comics.  In fact, this issue is likely one of the most reprinted Marvel Comics of all time.  But I don’t have any figures to base that statement on, so take it with a grain of salt.

Then the following month X-Men # 94, cover dated August 1975, was published, and from there, a bi-monthly X-Men comic was published for the next three years, before finally going monthly in the summer of 1978.

But back to Giant-Size X-Men # 1.  As the splash page says; “From the ashes of the past, there grow the fires of the future!” … “The grandeur and the glory begin anew with … Second Genesis!”.  The splash is similar to the cover, as it shows a new group of X-Man racing towards the reader, with the heads of the original team looking on from the background.

The story itself begins in Germany, with the introduction of Nightcrawler, then switches to Canada and we see Professor X meeting up with Wolverine, last seen in Hulk # 181.  Next the scene switches to Nashville, Tennessee and the Grand Ol’ Opry, where the Professor recruits, former foe, Banshee.  Things quickly switch to Kenya, in Africa, and we meet Storm for the first time.  Then it’s onto Japan, where we, and the Professor find Sunfire.  From there it’s on to Siberia, in Russia, and we are introduced to Colossus.  Finally we move back to the United States, in Arizona, where we meet, the hero, Thunderbird.

So that’s our introduction to the new team of X-Men that the Professor has formed.  Chapter two begins with the new team in the mansion, meeting Cyclops for the first time.  And Cyk explaining that the original X-Men have disappeared and he needs their help in finding them.  We get a quick flashback of the X-Men on a mission, along with Cyk’s brother, Havok and his girlfriend, Polaris.  Something happens and Cyclops finds himself alone upon their plane without his powers.

Cyclops makes his way back to the Professor, and as he is trying to explain what has happened, his powers return, causing havok (no pun intended).  It was then that the Professor sought out a new team of mutants.  And Cyclops leads them to the last place he remembers being at, the lost island of Krakoa.

The new team of mutants land and face lots and lots of dangers as they search the island, overcoming each and every one they face, of course.  Finally, they find the captured original X-Men team.  It appears that something has been feeding on the mutants, but the new team frees the original team, only to have the Angel tell Cyclops that their captor wanted him to return with more mutants.  It turns out that the island itself, Krakoa, is a mutant, as well, and it feeds upon fellow mutants.  It fact, chapter four is entitled; “Krakoa … The island that walks like a man!”

The rest of the story has both teams of the X-Men battling the island and it is finally Polaris, with her magnetic powers who saves the day.  If you haven’t read the story, I’ll let you find out exactly how she does it yourself.  But needless to say, both teams safely make it away, and the story ends with them wondering what they will do with thirteen (13) X-Men!

Hope you enjoyed my look at Giant-Size X-Men # 1 and that you’ll come back next week for a new Fabulous Find. And I’ll be back in two weeks with another new RETRO REVIEW.  Until then … be seeing you …