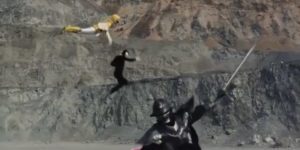 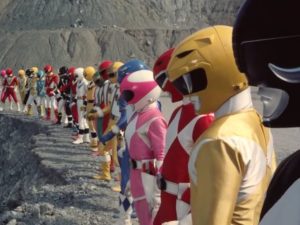 Kamen Rider World: the evil Shadow Moon, previously defeated by Kamen Rider Black, returns to life as a powerful giant called The Century King. He begins terrorizing the Japanese countryside with an army of resurrected monsters and is quickly opposed by the then-current Kamen Riders, ZO & J. They make short work of his army, and J grows to giant size – his defining trait as a Rider – to defeat Shadow Moon. 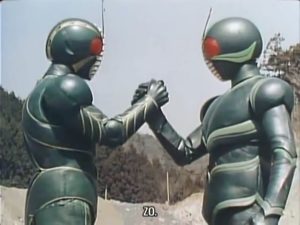 Super Sentai World: You’re going to detect a pattern here, but an incredibly powerful giant monster resurrects some previously destroyed monsters and begins terrorizing Japan, He’s opposed first by the Kakurangers, who are quickly joined by their four immediate predecessors (Dairanger, Zyuranger, Jetman, and Fiveman) for a giant free for against the monster army. Once they’ve been handled, all five teams summon their Super Robots to take down the big bad.

Toei Hero Daishugō: This one is unsubtitled, but so far as I can tell its divided up into three vignettes. In the first, the Blue SWAT team of Metal Heroes defeats a monster. In the second, we get the “Last Time on Power Rangers” recap of Super Sentai World. In the third, Metal Hero RoboCop knock-off Janperson busts some perps. Then the Metal Heroes say hi to the Super Sentai from across a canyon, end short.

All three shorts were produced by Toei – the company behind the Kamen Rider, Super Sentai, and Metal Heroes franchises – in 1993. They were screened at amusement parks as a 3D attraction, and Super Sentai World in particular has some camera poking gimmickry as a result. 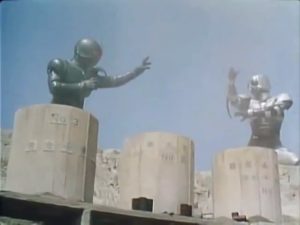 Although the Giant Rider fight is pretty cool.