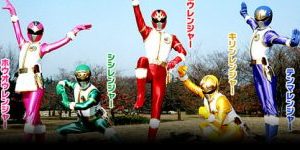 Welcome to Tokusatsu Gesundheit, where this week we’re looking at specific storyline from Gosei Sentai Dairanger’s seventh and eighth episodes.

The five core Dairanger have already been assembled, bonded with their mecha, and gained the power to destroy the monsters sent by the Gorma Tribe (more on them below). This calls for an escalation on the Gorma’s part, so they send their holy man High Priest Saw and his bodyguard Iron Face Chouryou to end the rangers before they can get even more threatening. Chouryou’s mysterious ties to the Dairanger’s leader RyuuRanger will prove a dangerous liability…but to who?

Airing in Japan 1993, concurrent with Mighty Morphin Power Rangers’ first season, Dairanger followed the modern flare-up in the ancient war between the mystical martial artist descendants of the Dai Tribe and the monsters of the wicked Gorma Tribe. It’s the 15th Super Sentai series and the 17th Sentai series overall (the first two series weren’t “Super” and weren’t officially counted until 1995).

Power Rangers would use the Dairanger’s mecha as the Thunderzords, the Gorma Monsters and Grow Bombs in Lord Zedd’s forces, and KibaRanger (the team’s sixth member) as the White Ranger.

The early episodes of Dairanger have STRONG Star Wars overtones, from the Gorma Tribe living in spherical metal palaces to their theme song being a lawyer-friendly take on the Imperial March to the two sides having opposing telekinetic spirit magic (one inherently good, the other inherently evil), culminating in this arc. The series leans into Eastern Mysticism and mythology a bit more as things go on, but the early episodes are about as subtle a tribute as Steam Wars.