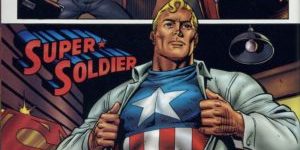 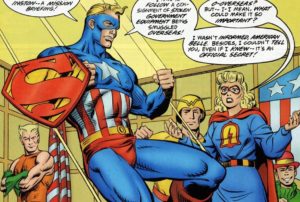 Welcome back to Strange Times & Places, where the debut of the Infinity Warps last week reignited some childhood fandom in me. As such, in honor of Infinity Wars: Soldier Supreme #1 hitting our racks this week, we’re looking at Super-Soldier #1 & Super-Soldier: Man of War #1!

Like Spider-Boy, JLX, and Dark Claw, Super-Soldier is an amalgamation of a DC character and a Marvel character. In this case, he’s the blending of Superman and Captain America. 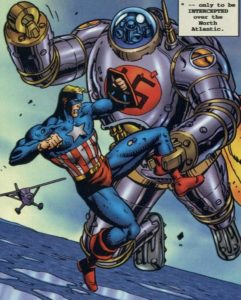 In Super-Soldier #1, we get a recap of Super-Soldier’s origin: 4-F army washout Clark Kent volunteered to be the guinea pig for the United States’ Super-Soldier Serum back in World War II. Created from the cells of a dead alien and charged by solar radiation, this formula granted him power beyond the wildest dreams of the scientists who created it. Lost in a battle with the robotic Ultra-Metallo at the war’s end, Super-Soldier has been unfrozen in the modern day to find a world he doesn’t recognize…and his old nemesis Lex Luthor still exerting fascist influence from the shadows!

In Super-Soldier: Man of War #1, we get  a tale from Super-Soldier’s World War II adventures! Clark and his best pal/press flack Jimmy Olsen are sent overseas to root out a traitor to the allied cause. Along the way, they’ll team up with Sgt. Rock & His Howling Commandos against the evil Major Zemo and his mighty War Wheel.

The merger of the Marvel’s Howling Commandos and DC’s Easy Company is a little rough around the edges, but works fine enough for the role they play in the story. 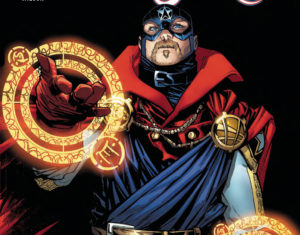 And don’t forget to reserve your copy of Cap’s latest Amalgamated mini-series!