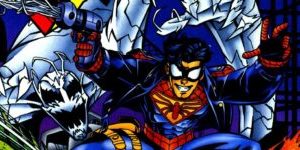 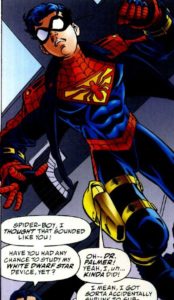 The Way-Cool Spider-Boy himself!

Welcome back to Strange Times & Places, where we’re celebrating the financial and creative success of Spider-Man: Homecoming by visiting a very different take on the Wall Crawler – Amalgam Comics’ Spider-Boy #1!

As explained last time we visited this universe, Amalgam Comics was a blending of the DC & Marvel Universes of the mid-1990s. Spider-Boy is a merger of Spider-Man (who was rather deep in the Clone Saga at the time) and Superboy (who was still rocking the “clone of a normal human genetically altered to have telekinetic abilities mimicking Superman’s powers” origin at the time).

After rescuing Johnny “Red” Storm from the rampaging Bizarnage at Project Cadmus, the Mall-Crawling Wall-Crawler heads into New York City to track down the escaped nasty known as King Lizard! There’s the slight complication of Lizzie having eaten some Pym Particles on his way out of the Project, meaning he’s growing toward Godzilla size, but it’s all in a day’s work for the Friendly Neighborhood Spider-Boy! 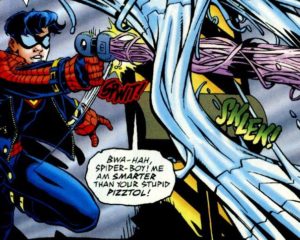