Hey ho, everyone, I’m back this week with a new RETRO REVIEW.  Sorry that I was not able to post last week, but I was tied up with selling and buying property and frankly just ran out of time to write up a new post and then was away from a computer, so I couldn’t even repost an old column.  So again, I apologize to my friends, fans and family for missing a week.  It hasn’t happened very often in the run of my posts, so hopefully you will find it in your heart to forgive me.

This week, I’ve visited the Marvel side of the Great Comic Book Vault and brought out from behind the locked and secure doors, two issues of The Incredible Hulk.  The two issues in question are: Hulk # 107 & Hulk # 108.  Obviously they are published by Marvel Comics and issue # 107 is cover dated September 1968 and Hulk # 108 is cover dated October 1968. 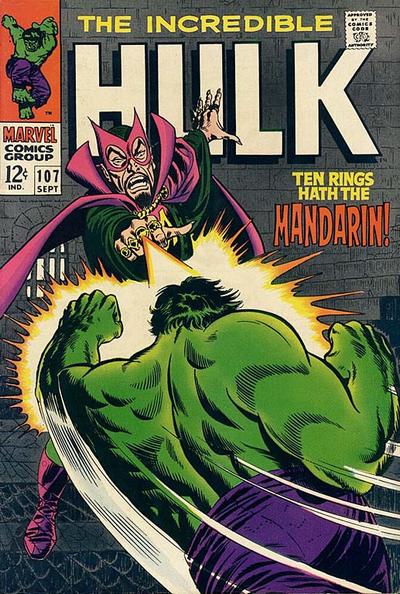 I had forgotten that the Hulk had ever fought Iron Man’s foe, The Mandarin, until I was looking for a comic for this week’s RETRO REVIEW.  But here is the proof that he did, with Nick Fury, Agent of S.H.I.E.L.D. thrown in for good measure!

The comic is written by Gary Friedrich, pencil art provided by Herb Trimpe and the inks by Syd Shores.  Marie Severin may have provided layout for Trimpe this issue.  The story is entitled; “Ten Rings Hath … The Mandarin!”  A great title, if you ask me!  The story picks up where the previous issue ended, with Nick Fury teaming up with the Russians, to battle the Hulk.  Needless to say, Nick and the Russians are outpowered by the Hulk and they come up on the short end of the stick in the fight.

But it is at this point that The Mandarin steps in, he plans to use the Hulk in his scheme for world domination!  The Mandarin teleports the Hulk to his stronghold, where we get to view a five page battle between The Mandarin and the Hulk.  Of course, the Hulk wins the battle, only to discover that he has been battling against a Mandarin robot and not The Mandarin, himself!

Next The Mandarin unleashes a massive yellow-skinned android.  Another five page battle is shown, with again the Hulk triumphant.  The Hulk crashes through walls and a battalion of The Mandarin’s troops to finally face off against the real Mandarin.  The issue ends with The Mandarin tricking the Hulk into a pit of quicksand and the reader sees the Hulk slowly slip beneath the sand, with The Mandarin gloating for the end of the pit. 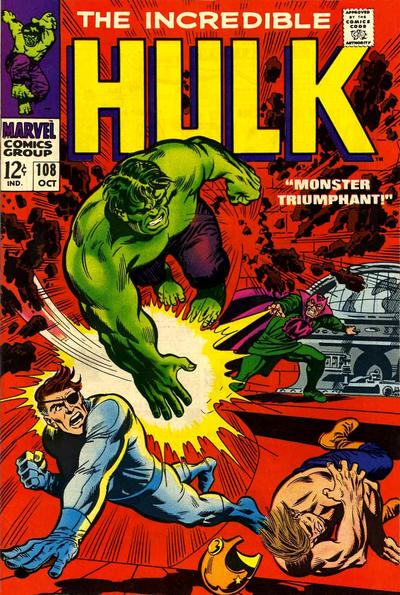 This cover was pencilled by Marie Severin and was inked by Frank Giacoia.  This time no alteration were done by John Romita Sr.

This story was written by Stan Lee, with the pencilling done by Herb Trimpe again and this time the inks were completed by John Severin.  Marie Severin may have provided layouts to this issue, as well.  The story in this issue is entitled; “Monster Triumphant!”.  The splash page again shows the Hulk slowly sinking into a pit, well actually a vat, of quicksand.  And as a vat, rather than a pit, it has sides, which the Hulk discovers and simply punches his way out.

Nick Fury and his counterpart from Russia also manage to escape with their lives and the issue ends with the Hulk leaving the destruction and searching for a place he will no longer have to fight and battle to be left alone.