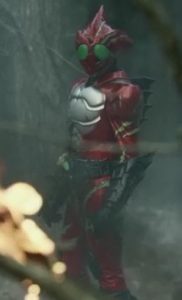 Thousands of artificial humanoid lifeforms walk among the Japanese populace, escapees from some less-than-above-board lab experiments. These creatures, called Amazonz, can live peacefully for about two years…at which point their hunting instincts take over. An elite team of mercenaries has been assembled to end these monsters before the public finds out about them, but a deadly encounter with an incredibly powerful pair of Amazonz introduced them to a new breed of artificial humanoid hero – Kamen Rider Amazons. 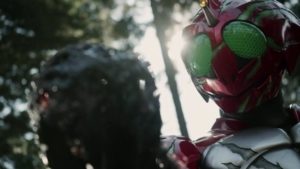 2016 marked the 45th anniversary of Kamen Rider and the 40th of Super Sentai, prompting Toei (the studio behind both franchises) to launch a “Super Hero Year” promotional effort. It mainly consisted of extra crossovers and webshorts, but the Amazon Prime original series Kamen Rider Amazons was created as part of the event. Season two aired in this year, so Japan must have been ready for dark and edgy Kamen Rider.

The first episode was just OK. While I certainly appreciated the more adult tone and calmer pacing, the pace fell noticeably to “glacial” at times. On top of that, none of the eponymous Riders showed up until the very end of the episode. The one that did, Kamen Rider Amazon Alpha, kicked ass and took names…but it still seemed like a long time to spend with characters who aren’t our leads. That said, I am still looking forward to making my through the series.

Come back next week for a new installment of Strange Times& Places!