Welcome back to the latest Fabulous Find.  This week I have pulled out another fanzine to share.  This one is slightly more recent, but still goes back almost forty (40) years to 1979.  The fanzine is The Comics Journal # 50, cover dated October 1979.  The Journal was published by Fantagraphics, Inc. and had an executive editor by the name of Gary Groth and the magazine size fanzine was actually edited by Kim Thompson.

I know The Comics Journal has over the years become rather pretentious, but back in it’s early days, it was a pretty normal fanzine/magazine for comic book lovers.  They provided useful information and had great artwork provided by many fans who later became professional in the comic book industry.  They ran lots and lots of interviews with creators that this fan ate up, back in the day.

This issue was no exception.  Take a look at the great front cover, drawn by Dennis Fujitake: 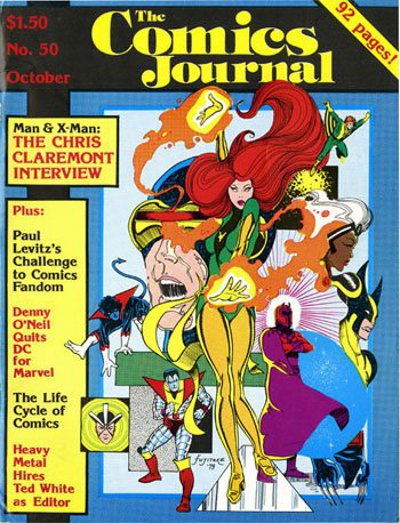 Opening up the fanzine and the first thing you saw on the inside front cover and the facing page (3) were ads for portfolios by Marshall Rogers and Nestor Redondo.  Yes, they are ads, but the artwork is great and a terrific way to start off their fanzine.  Next we get the typical editorial and a page containing the Table of Contents.  The first article is entitled; News Watch and gives the reader the lowdown on upcoming comics from Marvel Comics, DC Comics, as well as, the alternative publishers of the day.  Also some short info on undergrounds and other fan publications!

The next section is entitled; Blood & Thunder and is a letters section.  Leading off this issues letter column is a letter from DC Comics writer and editor, Bob Haney.  Other letters are from some “big name” fans, such as; Martin L. Greim, Alan Light & R. C. Harvey.

Next up is a four (4) page comics review column covering Marvel’s Conan the Barbarian # 58-101 and The Crusaders # 1-9 from Chick Comics.  This is followed by a seven (7) page book review column.  Following the book reviews is a two (2) page challenge/article to comic book fandom by Paul Levitz.  And the centerpiece of the fanzine is a long interview of Chris Claremont conducted by Margaret O’Connell and later by Gary Groth, with an introduction written by Ed Via.

It is accompanied by a very nice fan illustration of the X-Men I thought you might enjoy seeing, so here ya go: 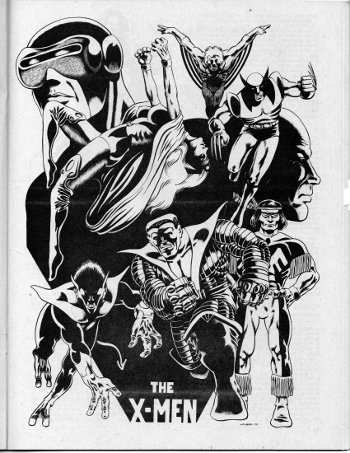 I think WIlber did an excellent job of capturing the team, don’t you?

There are just a couple more items left in the fanzine.  One of which is an article entitled; “The Rise and Fall of Richard Nixon and the Monsters from Marvel”.  This is written by Brian E. Cook and features a nice illustration drawn by Gary Kwapisz.  I’m not sure, but I think that Gary either came form the Detroit area, or had family near here.  Here is Gary’s art: 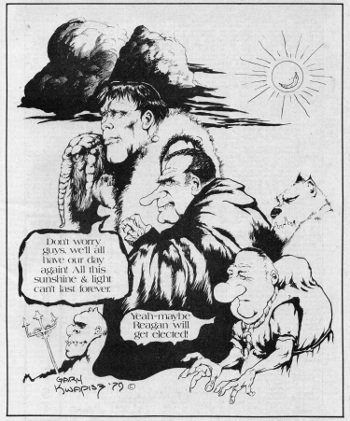 I personally think it’s brilliant!  Next to last is a review by Groth of the German book entitled; “The Gods From Outer Space” published the previous year.  And finally a three (3) page article looking at the life cycle of comic books, written by Jeffery H. Wasserman.

The fanzine/magazine has lots and lots of spot illustrations well worth it’s purchase, as well as, lots of ads selling merchandise from the day.  And it is wrapped up with a nice Elfquest/Red Sonja illustration on the back cover! 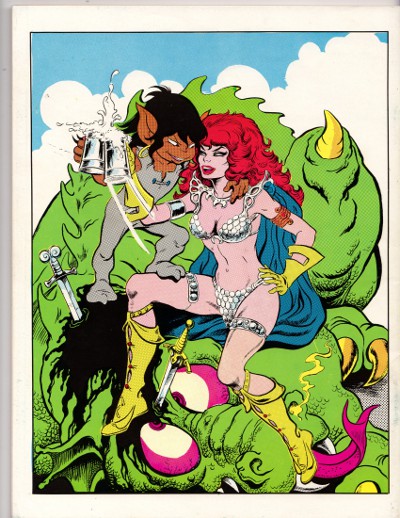 A pretty nice package for only $1.50, back in 1979.  And that wraps up things for this Fabulous Find, but I’ll be back next week with another RETRO REVIEW.  Be seeing  you …