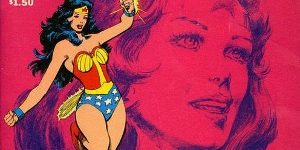 Welcome back to this week’s column/blog.  I guess Chris and I are on the same wavelength, as he wrote about Wonder Woman in his column this week and I’ll be doing something similar today.  For this week’s Fabulous Find I have dug around in the first box of fanzines I came across and pulled out Amazing World of DC Comics # 15, cover dated August 1977.  Take a look and see who is cover featured and spotlighted.  Yep, she’s a wonder, she’s Wonder Woman!  Here is the front cover, as drawn by Mike Nasser: 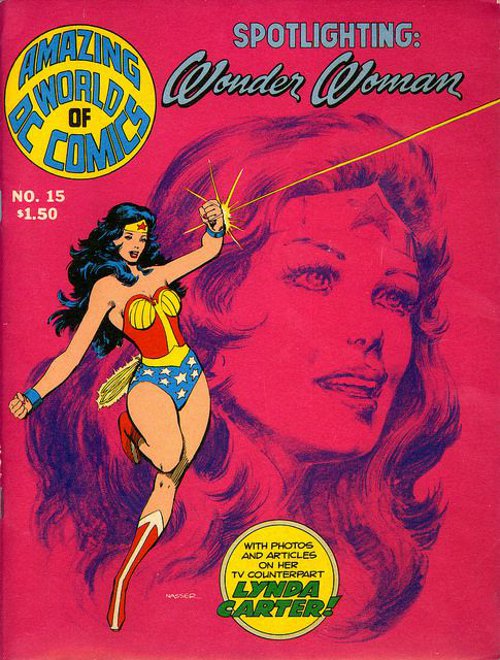 As you can see Mike did an excellent job, capturing the comic book Wonder Woman in the foreground and Lynda Carter‘s television version of Wonder Woman in the background.  A really nice cover and one that really jumps out at you due to the color palette.  As you can also see, the magazine was sold for $1.50 forty (40) years ago.

Let’s take a look inside the magazine.  First up is an editorial supplied by editor, Cary Burkett.  The next page contains the table of contents, as well as, the indicia.  The first article is entitled; “Everything You Always Wanted to Know About … Wonder Woman by Marty Pasko.  This article runs six (6) pages.  Next up, is a seven (7) page photo extravaganza featuring the DC Super-Stars of Television.  Two (2) pages showcase the George Reeves Superman series.  Then two (2) pages focusing on the 1966 Batman television program.  One (1) page showed a couple of pictures from the Shazam and Isis shows.  And finally two (2) pages revolving around Woman Wonder herself, with a couple of really nice shots of Lynda Carter in her Wonder Woman togs.

Following that feature, the magazine treats the reader to a five (5) page article, highlighting Wonder Woman’s Strangest Villains, such as, Dr. Psycho, Giganta, the Cheetah, the Crimson Centipede, Paper Man, Angle Man, Dr. Cyber and of course, Egg Fu!  Has there ever been a stranger villain than Egg Fu, in any superhero comic book?

Next, Cary Burkett is back with a four (4) page interview/conversation with Ross Andru and Mike Esposito, long time penciller and inker of the Wonder Woman comic book.  The article is illustrated by examples of these find artist’s work.

Next is a three (3) page article, written by Mark Evanier, entitled; “Her Name is Lynda Carter”.  And as you can image it focuses on the television program featuring Lynda Carter as Wonder Woman.  Even after all these years, and with apologies to Gal Gadot, has there ever been a person better suited to play Wonder Woman?  I certainly don’t think so!

Page twenty-nine (29) brings us an unpublished four (4) page Wonder Woman comic book story, or at least the start of one.  The story is entitled;”The Day Time Broke Loose” and it was written by Elliot Maggin and the pencils were done by John Rosenberger.  Rosenberger was assigned to draw this issue, but was struck down by illness, which prevented him from finishing the book, and unfortunately eventually claimed his life.  To contrast his uninked pages, the magazine also provides the four printed pages, done by Dick Dillin and Vince Colletta, that appeared within Wonder Woman # 217.

Next, we have a five (5) page article entitled; “The Fabulous Females” written as an interview with Barbara Gordon by Mike Gold.  I like his title, don’t you?  Following this is Direct Currents, which highlight upcoming DC Comics, written by Paul Levitz. This runs five (5) pages.  We next get a three (3) page Legion Outpost, written by Jack Harris, obviously it’s all about what is happening around and with the Legion of Super-Heroes and it features some excellent artwork by John Workman.  An artist who I think has never got his due, but I’m a fan!

So all that’s let is the back cover and since I’m such a nice guy, here it is in all it’s glory, as pencilled by Neal Adams and inked by Dick Giordano! 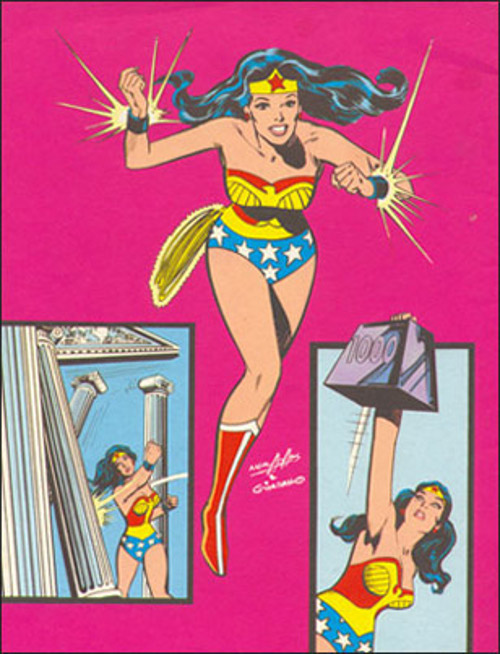 Thanks for stopping by.  Please leave me a comment if you are so inclined, as I always appreciate hearing what you think of my finds or reviews.  That wraps things up for this Fabulous Find, but I’ll be back next week with a new RETRO REVIEW.  Be seeing  you …